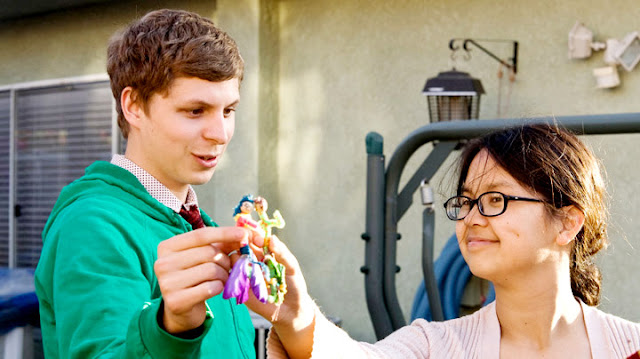 I really wasn't sure what I was watching throughout this romantic comedy that stars comic Charlyne Yi and Michael Cera, playing themselves.  And that is exactly what was throwing me off.  Paper Heart is a totally fictional film, where the cast all play characters with their own names, but the plot of the film is that Charlyne and Nickolas embark on a journey to find out whether true love exists.  Charlyne doesn't believe in love and says she has never been in love, but while filming, she meets and begins to date Michael Cera and the decision is made to keep rolling and to capture every moment on film, to see where it goes.  Can Michael Cera change Charlene's mind about the existance of love?

So while watching this film, interlaced with interviews about how ordinary people on the streets of America have or have not found love, while a romance develops between Michael Cera and Charlyne Yi, I couldn't help but be pulled in enough to wonder if there was any reality to the film.  Did they ever date?  Are they are real life couple who decided to base a film on how two actors could fall in love?  Or was this purely a movie, and this nagged at me all movie.

Well, it is just a movie, based on a screenplay written by Nicolas and Charlyne, but I guess it is saying something about the acting that I really did question whether what I was seeing was real all movie.  The stand out in the movie is Michael Cera.  While I enjoyed Charlyne's preformance and especially her puppet shows to tell portions of the story that were not caught on film,  it was Michael Cera who kept me laughing.

So this was an enjoyable addition to our festival line up that will be released in the USA in August.