This film was added to the schedule after only watching the trailer. Something about the tone of the trailer totally charmed me, so I didn't bother doing any further research on the small, South Korean film. In Daytime Drinking, after quite a few drinks Hyuk-jin is convinced by his friends to to on a trip the following day. But when he arrives, none of his friends can be found. What follows is a very understated comedic film where Hyuk-jin is constantly disappointed. He has just been dumped by his girl friend, his friends don't show up for this trip, he stays at the wrong inn, he cannot get a bus back home, and the couple of women he meets along the way just take advantage of him. From the sounds of it, Daytime Drinking should be a frustrating film to watch, but while I felt bad for the character, I did see the humor in his bad luck. He was just so trusting of his drinking buddies and hopeful that the trip had to improve, that I couldn't seem to help optimistic as his trip continued it's downward spiral.

Daytime Drinking certainly wasn't one of the best films I've seen this year at SIFF, but it wasn't bad either. The film suffered from being overly long and poorly executed. I was certain that the theater had started on the second reel, when the movie began in mid-sentence during the conversation where Hyuk-jin was convinced to leave town the next day. But no, as there were other instances of strange, abrupt cuts along side long scenes of nothing at all.

But I thought a couple of the characters had charm and in general enjoyed his meandering journey. And plus, it's a helpful reminder of ethics of (Korean) drinking, and all of the ways it can get you into trouble, ya know, for those times when you find yourself drinking with Koreans. 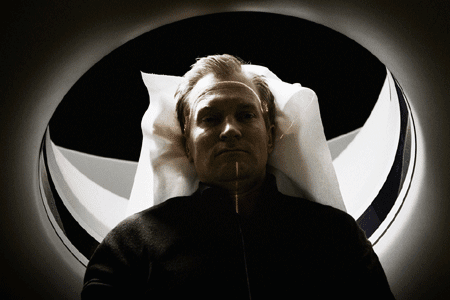 Another film from Denmark, because Danish movies rock! And one usually thinks of Dogma when talking Danish film, but Fear Me Not, like all of the Danish film that I've seen this year at SIFF has little in common with Dogma. Fear Me Not was cowritten by the director and Anders Thomas Jensen, who also wrote Brothers, After the Wedding, and wrote and directed one of my favorites from SIFF a couple of years ago, Adam's Apples.

Mikael (played by the awesome Ulrich Thomsen) has a great life, but something is missing and while claiming that he's happy to not be working, he is restless and enrolls in a clinical trial of a new medication. After some concerning side effects are brought to light, the trial is suspended, but Mikael likes the changes he is experiencing and he continues taking the drug in secret. The result is a complete change in his personality that he fully embraces who he has become and what unfolds becomes increasingly aggressive and violent.

Fear Me Not was definitely an enjoyable thriller. The writing was smart and the actors in the leads were quite good. I definitely recommend Fear Me Not to anyone who enjoys a good psychological thriller. This was a very intriguing look at the aspects of human nature that everyone probably has, but that are repressed. Until, they are allowed to manifest themselves, due to say taking a drug with unknown side effects.