An Education & Coco Before Chanel

I decide what to see often based on critical consensus, and as  result I don't often notice whether I'm seeing films made by women. Looking back, it appears that most years I see close to 100 films and only a few are made by women.  I've been averaging 6 films/year that have been directed by women with the majority of those never receive a major theatrical release. This year, that number has already doubles and many of these are critically acclaimed. I've already written about the depiction of women in two of this year's woman directed films, Jennifer's Body and Whip It, but I've also seen Sunshine Cleaning (Christine Jeffs), Humpday (Lynn Shelton), Sita Sings the Blues (Nina Paley), Talhotblond (Barbara Schroder), We Live in Public (Ondi Timoner), The Escape (Katherine Windfeld) and The Hurt Locker (Katherine Bigalow). But this year, there have been two very notable releases, An Education (Lone Sherfig) and Coco before Chanel (Anne Fontaine), films made by women about being a woman. And both films must be doing well at the box office, since they have each remained on the same screen for several weeks now.

What is particularly striking about An Education and Coco Before Chanel is that both films are about the limitations imposed by simply being born a woman. One could argue that this is due to their historical settings, but in reality, both films beautifully illustrate that 20th Century women must decide what they are willing to do to achieve success. While An Education dramatically depicts the heart-break of adolescence when young women realize that most of their dreams are so unattainable as to be only fantasy. Coco Before Chanel is about an older woman who is equally driven, but understands exactly what it takes achieve independence and does so without any hint of disgrace. And both films also are also praiseworthy for the skills of their actresses, Carey Mulligan and Audrey Tautou, which both are incredible in these films. 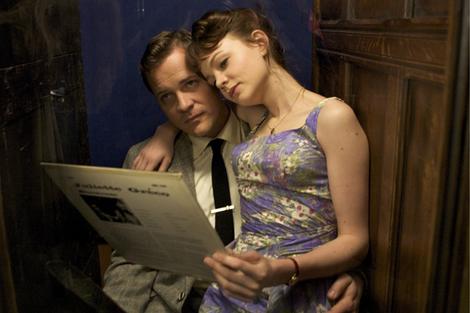 In An Education, Jenny (Carey Mulligan) is completely focused on her dream to go to Oxford. She is a star pupil with dreams of Paris and a taste for great art and music. Everything is going as planned until she meets an older man, David (Peter Sarsgaard), who charms her and shows her that there is more to life then books. But she also begins to see her life differently. After all of the studying and very hard work, and Oxford education does not guarantee anything for a young woman. The educated women in Jenny's life are her teachers and David's exciting entrance into her life has revealed that even her parents only hope that Oxford will bring her better marriage prospects. So when David reveals himself a cad, after Jenny has already given up her Oxford dreams in favor of living, Jenny is left with a very uncertain future. But she will show much more caution when confronted with promises made by men and her own hopes and dreams are certain to be tempered by this "education".

I found An Education to be a heartbreaking movie that rang so true to my own experiences, so much so that I couldn't move until after the credits had finished. Not that An Education is inherintly sad, it is just the way that women learn and grow into women that is sad. 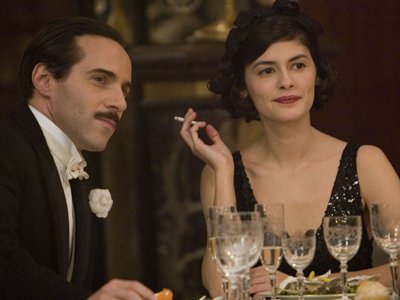 But Coco Before Chanel does not deal with a young women enduring the heartbreak inherent in growing up.  The film begins with a father leaving his two daughters at an orphanage.   As adults, the girls get by using their seamstress skills and singing at cafes. It is through this latter trade that Gabrielle was given the nickname Coco by a wealthy playboy, Etienne Balsan (Benoit Poelvoorde), and she becomes his mistress after her sister goes off with a wealthy suitor and Gabrielle is left without a singing partner and few other options.

Actually, this is where Coco Before Chanel shines. Audrey Tautou displays a quiet confidence as Coco. Despite her humility being constantly tested, she maintains a stoic air of determination.  She doesn't have any means of her own, but her ambition pushes her to make smart choices and also helps keep her pride in check.  So she decides to make herself available to Balsan, who seems happy enough to give her a room to stay in as long as she disappears anytime he has guests. And it is in Balsan's home that she meets people with the means that eventually allows her to open her own house of fashion.

While both films are excellent portraits of ambitious women, instead of only being a reminder of just how difficult it is to be a girl, Coco Before Chanel depicts an amazing success story.  Looking back, 2009 appears to have been a year with more cinema made for and by women.  Now, I'm just hoping that this will be a year when a few women will be recognized for their talents or at least maybe Hollywood will remember the success of women in film and offer to fund even more films made by and for women.