Even the orchestra is beautiful

September 05, 2010
Last week was nightmarish. Really. There were in-laws living in my livingroom, gluten poisoning, and to top things off, a work project that was completely overwhelming, that I never did really get a handle on. But there were a few bright spots. One was on Wednesday night, after the departure of the unwelcome futon crashers, we popped in the newest NetFlix arrival, Cabaret. 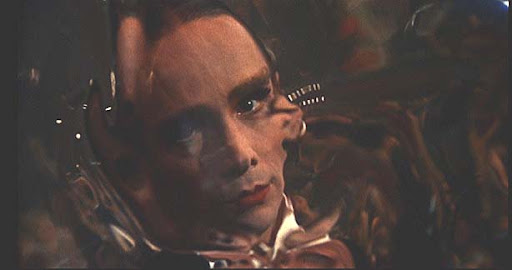 I have no recollection as to how Cabaret found it's way on our queue, but I have no control over what comes our way from NetFlix, other than making suggestions of titles to add. I know that we have a few hundred movies lined up and that they were randomized, but I never seem to know what is coming next and why we decided on the titles that arrive. But as I'll watch anything once, I don't mind this arrangement.

My knowledge of Cabaret was limited. I knew it was a musical and a play, and I knew it was a big Oscar winning film. I didn't remember that it was the movie that swept the Academy Awards on the same year that The Godfather won best picture. But most importantly, my expectations were non-existent. So imagine my delight when I discovered that the big opening number was the completely awesome "Mein Herr" and that the film hailed from the same inspiration that the Dresden Dolls drew from, Germany's Weimar Republic.

So how did I miss this connection? Perhaps it is my prejudice against Broadway inspired films and that I'm a tad ashamed about my love of dance in cinema, that I had never gone looking for this Bob Fosse gem. Or maybe the long standing backlash over a film depicting the excess and sexual freedoms of the Weimar period that proceeded the rise of the Nazis, had subconsciously influenced the avoidance of the film. But I was immediately infatuated with the care taken to film the little bit of dance that is appropriately photographed (read, not in extreme close-up, but from a distance and even bringing in audience shots) and with believable GLBTQ characters. These are characters I want to know and spend time with. This, like Velvet Goldmine, could be inspiration to a way to fashion one's life!

And Joel Grey! I cannot express how much I am in love with him as the Master of Ceremonies. His presence was a constant scathing commentary on the Nazi regime and the still rampant prejudices that hold too much weight in our culture.

Then it was back to the grind for a few more days, but in order to take a brief reprieve, we went out to see Robert Rodriquez's Grindhouse trailer movie, Machete. Yes, there are a few filmmakers that are still celebrating the 70s culture. And Machete was everything the trailer promised. It was a collection of ironic celebrity appearances, i.e. "introducing Don Johnson", old school exploitation plotting, and plenty of naked women, just because. While Machete is not great cinema, but Rodriguez doesn't strive to create cinematic masterpieces, but just a fun ride. What Machete does acheive, that is in line with Cabaret, is a satirical tone and less then subtle criticisms of the political right.

The movie that I watched last week that is anything but subtle was the astonishingly misguided film I Love You Phillip Morris. I had read about this film a couple of year ago and was shocked to hear that Jim Carrey was to star in a gay comedy with Ewan McGregor, but the film never surfaced in theaters. Friday night, I noticed it among the new releases so I brought it home out of a kind of morbid curiosity.

I Love You Phillip Morris is among the most painful cinema experiences I've had of late. Right up there with watching Tulse Luper's genitals smeared with honey and Russian women spit up bread to make grotesque dolls. Seeing Jim Carrey's attempt at depicting a gay con-artist in love was just like watching Arizona Governor Jan Brewer's debate last week. It was just as difficult to watch, but unlike Jan Brewer, I feel sympathy for everyone involved with this movie and pray that this cinematic disaster is buried deep in the film archives to never resurface.