October 11, 2010
Sometimes, it is almost as if American culture is so distasteful and alienating that sometimes, I dream of exodus. As I spend an inordinate amount of time alone, it is easy to forget just how at odds my own point of view is with the culture as a whole, but occassionally, something happens which makes it difficult to ignore. Major elections are the biggest reminder of just how divergent my values are, but occasionally a memorial day screening of a George Clooney movie does the trick. 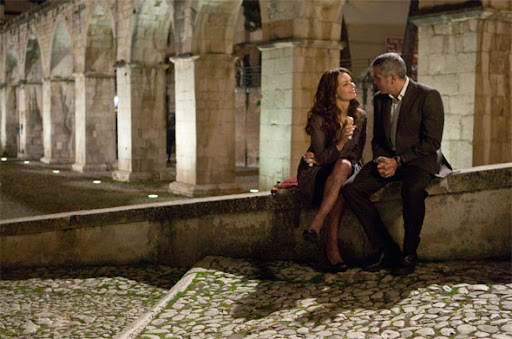 I went to The American knowing little about the film, other than it was directed by Anton Corbijn who made the stunningly stark and beautiful Ian Curtis biopic, Control. I was immediately struck by the quiet of the picture. The opening scene perfectly set the tone for the following acts, with Jack (Clooney) walking with a lover in a perfectly silent, snow covered landscape, until violence suddenly erupts, leaving Clooney's character alone to travel to a place to lay low. This quiet continues throughout the film, allowing the audience to watch and speculate as to who Jack (or is it Edward?) is and what exactly he is involved in that has him hunted by "the Swedes".

After the initial flurry of action, Jack receives instructions via payphone, and is given a location where he is instructed not to make friends with the locals while he waits for his next assignment. Thus, the majority of the film is set in a picturesque Italian town where Jack spends his time doing pull-ups, resting, and watching. The American is not a film where the plot is advanced with dialog or with long stretches of exposition. It instead unfolds through quiet observations of Jack's actions during this working vacation, where Jack never drops his guard, except perhaps during meals shared with the local priest and during his visits to a local brothel. And because the setting is serene, Jack is alone, and the action is minimal, the audience like Jack searches for clues as to when another violent outbust will occur, because as soon as Jack makes this assignment his least, genre dictates that he will not live to see this last mission finished.

I found the meditative nature of this character study to be completely absorbing. First George Clooney is charismatic and thus easy to watch even when he is doing very little. And the calm quiet of The American's atmosphere only added suspense to this cinematic waiting game. But while I was gnawing off my hands, the tension would suddenly be broken by the sounds of audience unrest. Yes, the audience I was watching The American with was bored. The were audible sighs and grumbles throughout the film. And I haven't any clue why they were so bored, as I was completely sucked in for the duration.

Since then, I have read that despite topping the box office on opening weekend, people were not pleased with what they saw. And I couldn't help but wonder what proportion of cinema that I greatly enjoy is generally disliked. These thoughts are unsettling as they contradict my belief that if a movie is good, most people will enjoy it and the reason that more don't love the same films I do, is because they haven't seen them. Even in my own experiences, this ideology doesn't hold up, otherwise Citizen Kane would be my favorite film and it is not. So while I recognize that everyone responds differently to good cinema, I still believe that most can agree on whether a movie is good. But wow, was that notion shattered at The American.

I did greatly enjoy The American, there were issues with the film. And one particularly odd plot point, considering that Corbijn is a photographer. The notion that any hit man would have a little, tribal butterfly tattoo struck me as false. Not only that, but the aesthetic was wrong, so I was irritated at not giving Clooney a better fake tattoo. And my odd reaction is not about a man having a butterfly tattoo, but more about it being a little, lower neck butterfly tattoo. I really with Carbijn had written the butterfly theme differently, like having his cover job entomology and then he could have borrowed the kind of imagery seen in The Woman of the Dunes.