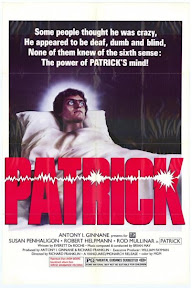 on going a little further back into the history of cinema, but this group of films are all from the 1970s.

Patrick is an Australian movie that was prominently featured in the Ozploitation documentary Not Quite Hollywood. In my effort to watch all of the films referenced in Kill Bill, vol. 1, I had overlooked Patrick. It was stunning to see just how much the hospital scenes had borrowed from this rather obscure film. But in actuality, while one can see echos of KBv1, Patrick is a very different film.

Patrick opens with him electrocuting his mother, i.e. toaster + bathtub. After this opening, the rest of the film is centered on Kathy, the nurse who cares for Patrick. He has been in a coma since the accident and stares straight ahead. She is told he is brain dead, but becomes convinced that he is communicating with her using telekinesis. While this is far from the best piece of horror cinema I've seen, it is a fascinating one. And Patrick is a bit unsettling, the way he just stares, unblinking. 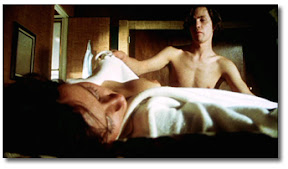 he stereotypical vampire movie. In fact, it questions whether Martin is a vampire at all, but a serial killer. His techniques have much in common with those used by Dexter, except that Martin sedates his female victims so that he can have sex with them, before killing them. It is only Martin's uncle who seems convinced of a family curse and screams Nosteratu at Martin repeatedly.

Then finally there was Blood Freak. I had to see this after I heard it was about a giant turkey monster, but this 1972 student movie is a true oddity. At times, Blood Freak threatened to become Refer Madness 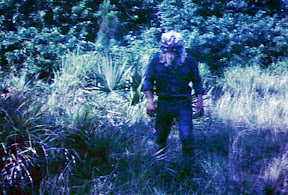 , but once the plot brings the characters to the laboratory at the turkey ranch, Blood Freak gets downright freaky or at least silly. This is a terrible and misguided film that is rather light on turkey monsters and gives a few too many speeches on the dangers of marijuana and the importance of finding christ, but is also short. And who can forget about a movie about a giant blood thirsty turkey monster?