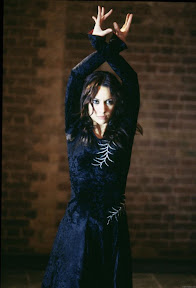 Well, it was romantic and a little twisted and a bit sexy, but sadly, not horrific and mildly disappointing. And I don't care! The love triangle that develops at the first of Dot the I is hot and when the triangle is revealed to be a fraud, created as part of an emotional snuff film that Carmen has unknowingly found herself at the center of, the film suffers from implausibility, but remains sexy and fun with a little dash of evil.

And since my boyfriend, Tom Hardy, was just barely in Dot the I, I had to watch Bronson, based on Brittan's "most violent prisoner". And again, I don't think it could be called horror, even with all of the promise of excessive violence. And it delivers plenty of bare-knuckle fist fights, orche 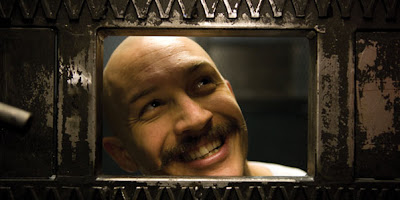 strated by Bronson, who never has a fighting chance against multiple prison guards in riot gear, armed with clubs. Bronson is a captivating character study about a flamboyantly and gleefully violent man who appears to thrive in the theater of correctional institutionalization.

Bronson also emphasizes why there is so much enthusiasm over Tom Hardy. Sure, he was incredibly hot in Inception, but in Bronson, he shows such charisma and brings a completely implausible character to life and even makes Bronson's violent episodes seem logical and not a symptom of madness. This is a fascinating piece of work that while being highly stylized is based on documented facts. Now I would like to see another film, a documentary about this Charlie Bronson exploring how the British legal system can explain keeping him locked up indefinitely, in complete isolation, when he has only been sentenced to 7 years.

So the horror challenge has been derailed by too many fascinating films that are peripheral to the horror genre. But I'm doing my best to get back in there with the frights, splatter, and gore.