It's that time again

I've only attempted the October Horror Movie Challenge once and didn't quite complete it. I believe I came in at 29 films, with most of them being new to me and all of them were feature films. I'm already off to a late start, since Friday, I had planned to see Buried after work which just didn't work out, due to long work day and nasty headaches.

But on day 2, I finally went to my first horror movie of October. There were some questions as to whether Buried is horror. According to IMDB.com, it is not, but I couldn't imagine that any movie that is set in a coffin already buried in the earth wouldn't qualify for the October challenge 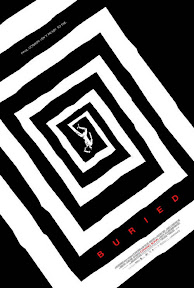 . So, I drug Nate out to Buried today, when he actually was in the mood for a romantic comedy.

And I'm pleased I did. I was very curious about how this movie could even be made, but it worked and was quite an intense study of fear and claustrophobia. Buried was a very dark movie as the camera never strays from the interior of the buried coffin with the frightened Paul Conroy (Ryan Reynolds) inside. There is absolutely no relief from the darkness or the confines of the pine box for the duration of the film and the experience was surprisingly unnerving.

Paul Conroy (Reynolds) discovers he is entombed after regaining consciousness after his convoy was attacked by insurgents in Iraq. It is not until his captor calls a cell phone, that was left in the coffin, that Paul discovers that he has a tool that might allow for his rescue. I cannot help but to be impressed at what the filmmakers did with such a simple premise and the limitations of the setting. Somehow, Buried manages to be engaging, have a definite narrative, maintain tension and even manages critique of the Iraq occupation.

Not a bad start to the Horror Movie Challenge and I now have no hesitation at calling Buried and horror movie. We will both be avoiding confined spaces for a while and I'm already not looking forward to returning to my basement dungeon of the laboratory on Monday.