December 06, 2010
Everyone knows the story. Aron Ralston was hiking when he is pinned by a falling boulder and cut off his own arm to escape. But how would one make a film about an ordeal that everyone already knows how it ends? This story poses some serious challenges for a feature length film as it is asking an audience to be trapped in a canyon with Ralston as he ponders his predicament, for 5 days, until he finally decides to cut his way free. One could decide to approach it as a horror film, using the viewer's dread and claustrophobia to build to the final gruesome scenes when cutting occurs. It could also explore the territory of so many other man versus nature films, and use Ralston's days of isolation for internal exploration. So it was a bit of a surprise that filmmaker, Danny Boyle, decided to conquer this project as his films are about as far from inters 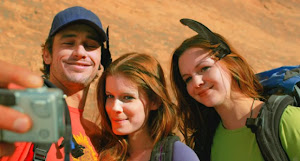 pective as it gets and it is hard to imagine him attracted to a project that puts it's sole character beneath a rock for it's duration. Boyle, who never fails to be flamboyantly entertaining, fed my curiosity as to how he would handle Aron Ralson's well publicized story.

127 Hours is a highly watchable film; Boyle takes this ordeal and makes it downright entertaining. He uses plenty of flashy shots, split frames, and rock music keeping the film loud and visually interesting within the limits of setting. Unlike another of this year's releases, Buried, the camera work keeps the audience from feeling at all trapped with pans out of the crevice, opening to wide shots of the surrounding desert and clear blue sky. 127 Hours has none of the intense fear and claustrophobia that made Buried such a challenge to endure. 127 Hours maintains a spirit of adventure instead of delving into questions of morality or man's place in nature. If this film has a message, it is simply to leave a note before going on an excursion into the wilderness. 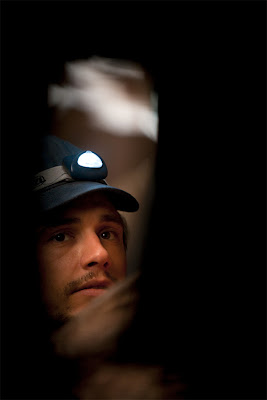 What this film really understands about Aron Ralston's story is the kind of man he is. Aron Ralston (James Franco), like many rock climbers, treats nature with a spirit of conquest. He sets out to complete hikes faster than anyone before, to try new climbs, and while experienced, it is his cockiness that gets him into trouble, but also makes him appealing. This is perfectly illustrated during the opening of the film, when he prepares for his Saturday expedition and meets two female hikers on the trail. He offers to guide them and leads them through a climb and to an underground lake. All along this adventure, he photographs and takes videos to document these accomplishments.

It isn't until Aron's new friends depart and he hikes further into the desert canyon that he is suddenly pinned by a falling boulder and the film's title finally appears. The tone shifts and becomes more serious, but maintains levity due to Ralston's constant documentation of his predicament. At one point, he even interviews himself about his dire situation, asking if he was actually stupid enough to not tell anyone where he was going. But James Franco as Aron appears calm and rational throughout his entrapment, carefully taking stock of his limited supplies including a small amount of water, camelback, head-lamp, rope, and a woefully inadequate multi-purpose tool, with a tiny knife. He spends his time trying to chip away at the boulder with the dull knife, while hallucinating and thinking of his family and lost loves. These sequences that depict moments of grief or regret seem overshadowed by his generally upbeat nature. And none of these sequences give relief from the tension. As time passes, one cannot help but to know that soon, he will have to cut himself free and climb out of the desert, keeping the tension on edge, waiting for Ralston's dreaded method of escape.

It took about an hour for Aron to cut off his arm, just above the wrist, but thankfully, it occupies no more than 2-3 minutes of screen time. However, they are graphic and intense minutes. After, listening to Aron Ralston's account of how he severed his own limb, 127 Hours succeeds in communicating exactly how it was done using mostly sound effects and sparing the more graphic visual details. This resulted in the most graphic moments of the film being watchable. After this seemingly agonizingly long scene, his hike to safety and film's conclusion is brief. The overall result is an enjoyable film, one skillfully acted and directed, but ultimately an empty experience with little below the surface. But it succedes in capturing the mindset of an adventure seeking man who had what it took to survive this brush with death, but based on the character developed in this film, he might not survive his next accident and there will probably be others.