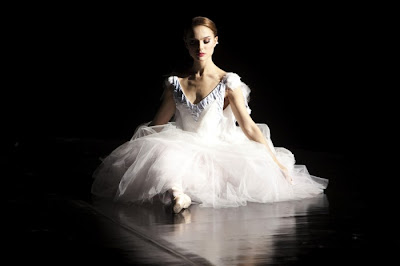 I waited to blog about Darren Aronofsky's Black Swan after discovering that there were a couple of other ballet themed films that I had not yet seen and wanted to be well versed before tackling this project. Having a personal interest in ballet and more then casual acquaintance with that world, it seemed that any attempt at criticism should come from a place that is well versed on the cinematic history of ballet in cinema.

But on further reflection, there is no reason to look to dance cinema before a discussion of Black Swan. Despite it being about a young dancer, Nina (Natalie Portman) getting the lead role in Swan Lake. Her attention to perfection and reticent character makes her an obvious choice for dancing the White Swan, but the lead in Swan Lake must also perform her seductive twin, the Black Swan, which is an uphill battle for the virginal Nina. Knowing that Natalie Portman and Mila Kunis trained with the New York City Ballet for a year in preparation for this part, one would expect there to be more on screen ballet. What draws me to dance films is the promise of on screen dance, so in this regard Black Swan was a disappointment.

Instead of a dance movie, Black Swan is a character study of a woman's descent into madness. This is a film with more parallels with Polanski's Repulsion then Altman's The Company. But the stress placed on female dancers do provide a uniquely plausible situation for psychological horror. To this day, ballet remains an art form where women are asked to conform to completely unrealistic cultural beauty standards. In order to succeed in that world, young girls must have a perfect body-type appearing long and lean without being tall enough to tower over male dancers while on point. They have to be very thin, much thinner then possible if eating regular meals despite dancing 8 or more hours a day. Due to the intense competitiveness between female dancers, dancers dance injured trying never to reveal the pain they are experiencing. Actually, pain is part of the world of ballet, in that dancers develop a very high tolerance to physical discomfort, because dancing ballet hurts, even when uninjured. However, the rewards for success are financially small, but culturally great. A young ballerina is the embodiment of mythical perfection for women. This is likely why all little girls seem to dream of becoming a ballerina or at least wearing pink tulle.

And this is where Black Swan really works as psychological horror. Like many girls in the ballet, Nina is being pushed into this world by a mother (Barbara Hershey) who did not rise above chore dancer during her career and hopes that her daughter will be the prima ballerina that she was not. And so Nina is sheltered by her mother, keeping her a child and Nina's only outlet for self expression and independence is her work at the company, where she strives for rigorous perfection and achieves a high standard of discipline and determination. But evident on Nina's face is the real driving force behind her fight for perfection. Instead of dancing for the sake of art, or for herself, she starves and rehearses through the nights out of sheer terror of failure. And this terror is worn on Natalie Portman's face during nearly every frame of Black Swan.

And Nina's terror is only enhanced as she gets closer to achieving her goal to dance the lead in Swan Lake. A new arrival at the company, Lily (Mila Kunis) becomes the personification of Nina's fears as she struggles to learn the more challenging role of the the evil side of the swan queen. Lily gives the impression of the natural dancer who doesn't have to fight to achieve perfection and her ease gives her a charisma that Nina lacks and also a sensuality that Nina both drawn to and frightened of. So Nina and Lily become both friends and at least in Nina's mind, desperate rivals.

So much of the plot of this film and Nina's descent toward madness is plausible and acts as an allegory of womanhood, but Nina's reticence keeps it from being authentic. Nina is never a joy to watch move and this kept me from believing that she was able to achieve the heights of a lead dancer. But the portrayal of her waking nightmares were always authentic and well staged. Black Swan opens with a dream sequence and can be presented as a segmentation of Nina's hallucinations. And the portions of the film that exist in Nina's mind are terrifying and didn't come across as predictable and has some nice horror movie jolts. This is where Black Swan succeeds along with Natalie Portman's depiction of this frail ballerina, who is disintegrating or rather being eaten alive by her need for perfection, both psychologically and physically, depicted by Portman's shockingly, frail tiny body which shrinks over time.

But Black Swan wasn't entirely successful as a ballet film, even a ballet horror film as it left me longing to watch real dancers move and for more time with Mila Kunis's free-spirited depiction of a young dancer. I see what Aronofsky was attempting to portray with Black Swan, a kind of feminine version of The Wrestler, but it doesn't quite achieve the greatness that it strives for.