May 28, 2011
Beginners will be a festival favorite. As can be seen in the trailer (linked below), there is a lot to be charmed by here. There's Ewan MacGregor, who cannot seem to turn off the charm, portraying Oliver after the death of his gay dad and he is falling for the lovely French actress, Anna (Melanie Laurent) and Oliver has inherited his dad's adorable Jack Russell terrier, Arthur, who talks to Oliver. I mean who doesn't like a movie with a mopey Ewan MacGregor flirting with Melanie Laurent. And I was totally on board once I saw the trailer as it is a great trailer, but unfortunately, the movie doesn't add much beyond length to the trailer. But it is still pretty entertaining.

What really does work in Beginners in the depiction of Oliver's relationship with his father Hal(Christopher Plummer). Shortly after his mother's death, Hal comes out as gay and spends the remainder of his days living life to the fullest. He has a much younger boyfriend (Goran Visnjic), goes out to clubs, and subscribes to nearly every gay periodical around. Even after a terminal cancer diagnosis, Hal continues to live life to the fullest while Oliver ties to stay by his side through the appointments, treatments, and finally his last days in hospice care. And all of the flashbacks to moments shared between Oliver and his father are touching and a lovely portrait of a little seen father and son relationship. Where the film falls short is in the romance between Oliver and Anna. 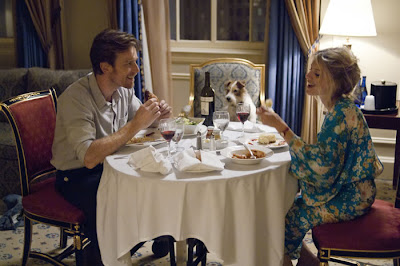 The beginning was promising, when they meet at a Halloween party when he is dressed as Freud play acting psychoanalysis all night and she has laryngitis, so is mute using a notepad for communication. But once the initial meeting is over, and Anna gets her voice back, the romance follows every convention in the book. There are early scenes with them frolicking, rollerskating, etc. and when things seem to be going well, they have to have the convention imposed breakup so that Oliver can realize that just because his parent's marriage wasn't exactly as it appeared, that is no reason to be afraid of commitment, or relationships, or whatever the contrived issue was.

But despite the contrived romance there was still a lot to like about Beginners. It just is not as moving or profound as it wants to be and it also suffers from trying too hard to be a cute, quirky indie film. As someone who appreciates the artifice of cinema and my favorite filmmakers revel in its artifice, but here the aritiface doesn't marry well with the realism of Oliver's journey to understand his childhood and deal with the passing of his father. Beginners marks the first disappointment of SIFF 2011, but this is still a pretty endearing film, just not a great film in comparison to Perfect Sense and 3.