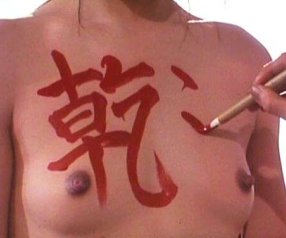 The summer of 1997 was spent doing a research internship in Chicago. Not being much of a social butterfly, I never did find anyone to spend my free time with during those 10 weeks, so when I left the lab, I explored the museums, art galleries and the cinema. The most memorable of these movie outings was a trip to the Music Box to see Peter Greenaway's the Pillow Book. Ever since that summer night, it is the Pillow Book that I reference as my favorite film.

Just a few weeks ago, I revisited the Pillow Book on DVD just to see hif it stood the test of time. I hadn't seen it in several years, but my reaction for the first time was not favorable. I had grown an uneasy relationship with the Pillow Book and Peter Greenaway, but I should have trusted in its ability to withstand repeat viewings as over the years, this is a film that I've probably seen dozens of times. I used to see everything I could by the English painter turned experimental auteur, but recently, I've found his work to be excessively cold, pretentious and often slightly nauseating. After that most recent home viewing, the film lost its standing in the pantheon and I was a bit mystified by my previous adoration for Greenaway. 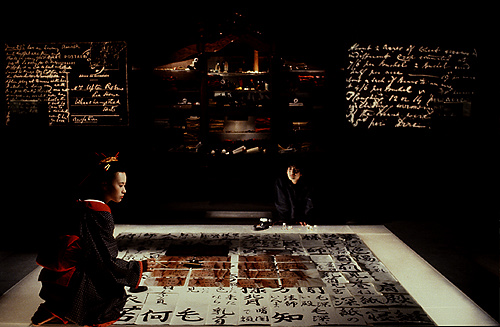 Friday night, I was able to see the Pillow Book again in its original aspect ratio with an audience and it has regained its place at the top of my favorite films. This is a film that is hurt by small screens and the cropped, wide screen format. And it is a projectionist's nightmare. The constantly shifting frames kept the projectionist busy throughout the screening keeping text and boxes from falling off the screen. I had forgotten about just how experimental Greenaway's layered montages are, since much is cropped in the DVD versions or simply too small to appreciate. This format wasn't pioneered with the Pillow Book as Prospero's Books also incorporates innovative use of text, subtitle, and layering of frames, but appears much more organic display of Japanese art and calligraphy then it did western texts. And not only does Greenaway layer motion picture images, but text. The text from Sei Shonagon's Pillow Book is layered alongside subtitles, scrolling lyrics, and the text is in more languages than Jerome is credited in knowing. We see English, French, Japanese, Chinese, Sanskrit, and even a scribbled bit of Yiddish appears. Not only are languages displayed for visual appreciation, but the we are treated to the sounds of many languages too.

While the visuals of The Pillow Book are unforgettably sensual, the use of sound is every bit as experimental. During this viewing I was struck by how the use of sound distinguished the major movements of the film. Nagiko's childhood was enveloped in the sounds of a traditional Japan (voices of Buddhist monks, Japanese court music) and those of her childhood home, specifically an old popular Chinese song that her mother always p 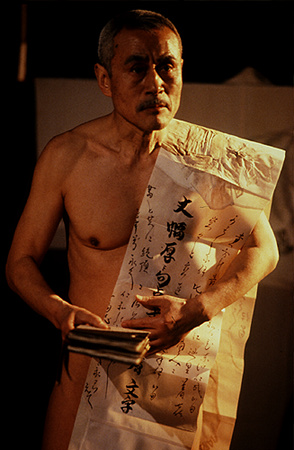 layed. Nagiko's exodus from Japan was filled with the noises of the city, jets flying overhead, and loud club music. Finally her return to Japan and revenge combines some of the music earlier in the film, but also uses classical music. I've always been struck by the impact of sound, but this viewing I was particularly struck by how unusual it is, not just in the musical choices, but in the way that sounds often overlapped one another just as Greenaway has overlapped the visuals. And again, the languages heard are just as diverse as the text that scrolls across the screen. Jerome, the translator, is not the only character with fluency in multiple Eastern and Western languages and Greenaway must have an aethetic ear, since there are several portions of the film where Japanese is spoken, but never subtitled allowing for the experience of just listening to the rhythm of the language.
So thinking I had been overly impressed with this film in the past, due to not yet having seen so many other great films, I began to see the weaknesses in Greenaway's films. The acting is perfunctory, the characters are in no way representations of people and therefore difficult to relate to, and the allusions are so plentiful and often obscure and overly academic. But these weaknesses are really just a difference in the filmmaker's approach and values. The actors are little more than bodies and voices that are used to add sound and movement to Greenaway's cinematic canvas. The characters are not meant to be realistic as Greenaway has a preference for allegory over realism. So while I have trouble connecting to the majority of Greenaway's films, the Pillow Book remains my favorite film. Here is a stunningly painted allegory of love, writing and revenge that shares my personal fetish for the written word as an object of beauty and sensuality. Yes, indeed, I still am completely in love with every frame of this film, even the ones that I have not yet been able to figure out why they were included, but I'll just keep looking at it until they do.