April 01, 2012
I doubt that I'll attempt to review the new film, the Hunger Games, but I did see it and had a great time. Unlike the rest of America, I did not read the books and really came in with very little knowledge of the cultural phenomenon. But knowing what I know now, specifically that it is a series as popular with young adult readers as a certain vampire, romance series with apparently 100% less misogyny and romanticism of abusive relationships, I was pleasantly surprised by the film.

First of all, there aren't nearly enough movies made with strong, female characters, so I'm thrilled that a movie with a female protagonist, the Hunger Games, made 155 million during its opening weekend. This, along with Bridesmaids, challenges the notion that men won't see movies with a female protagonist, unless drug there kicking and screaming by a girlfriend. And Katniss Everdeen (Jennifer Lawrence) is a fantastic female lead. She's strong, independent, confident, brave, and her obvious capability garners respect. And she is a badass with a bow and arrow. As a female fan of action cinema, I sometimes forget just how rare action heroines are, especially ones that are believable and not just lithe sex objects, posed with a weapon. And probably in large part due to Katniss's stoic and smart portrayal by Jennifer Lawrence, I really enjoyed the Hunger Games.

And as expected, there's backlash. It seems that anytime women are in the spotlight, all we can focus on is their perceived, physical shortcomings. Just so you know, Jennifer Lawrence is too fat to play Katniss. Yeah, I know, it's like they didn't even see the movie. Katniss was providing for her family by hunting small game animals, explaining why she might not look like she is starving to death. But the truly astonishing fan reaction to the movies is the reaction of fans to some of the characters being played by non-Caucasian actors, but then there is some precedent for people being taken aback by the portrayal of anyone, even incidental characters by actors that are not white. Sociological images did a nice piece using movie trailers to demonstrate just how much Hollywood marginalizes racial minorities. But just because we aren't used to seeing people of different races portrayed in Hollywood movies, doesn't excuse the anger expressed in the racist tweets made by fans.

Myself, I was impressed by the decision to cast African American actors in some of the roles in the Hunger Games. I saw it as some evidence of progress that a few characters would be played by people of different races, although, apparently the characters in the Hunger Games race were specified in the book. Still, it is a nice change to see some of America's diversity portrayed on the silver screen. The last time I noticed casting of incidental characters and extras as black was in Steve McQueen's Shame. While I did not like the film, it was fascinating that so many of the incidental characters, like passengers on the subway or a certain percentage of Brandon's hook-ups were African American. Can't help but to wonder why more filmmakers aren't attempting to reflect the diversity we each see around us on a daily basis in the films they they make? 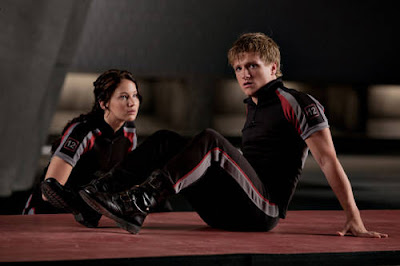 My only complaint about the film was the way the hand-to-hand combat sequences were filmed. Much of the movie, even once the tributes are put on the island to battle each other, the chases and much of the action is shot via steady cam at enough of a distance to observe the action while being able to identify the characters and easily follow the action. However, anytime characters fight in close proximity, suddenly the camera shakes and cuts are too quick to follow the action at all. During the final fight, it was completely unclear to me who or what Katniss shot an arrow through that brought an and to the standoff between Katniss, Peeta, and Cato. And I was not alone in this confusion. Leaving the theater, I heard others (probably those that had read the book) explaining this scene to baffled friends. Fortunately, not understanding the details of how Katniss triumphs during each confrontation isn't essential to enjoying the film, just aggravating and a bit dizzying.

But overall, I found the Hunger Games to be a very engaging movie. The cultural climate seems perfect for a film about an totalitarian regime that keeps the impoverished districts in line by demanding that one boy and one girl are given over to fight to the death in a spectacle, broadcast for all to watch; a kind of dystopic reality show. Watching the Hunger Games does elicit connections with the current waves of unrest that have led to the formation of the occupy movement and probably, to some extent the tea party before that. Makes one long for a strong, independent girl to shake things up and change the direction of history.

April Bauer said…
I just finished the book series and really enjoyed it. Matthew described it as mind candy. I'd like to see the movie as I really thought Jennifer Lawrence was amazing in Winter's Bone. I also saw the references to her not being thin enough, but she's often described as muscular and better fed than her competitors, so I don't see a problem. I definitely envisioned a diverse group in terms of the characters, Collins doesn't do more than state they have "olive" skin, which I don't think necessarily means one race or another, but how strange that people should be angry at diversity, I imagined Rue as african america.
5:57 AM