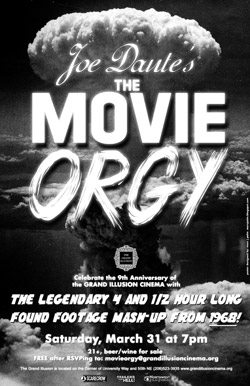 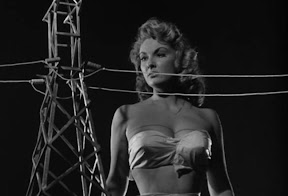 ecurrence of several films that provided a backbone for the film as a whole. Scenes from Attack of the 50 Foot Woman (1958), College Confidential (1960), Beginning of the End (1957), Earth vs. the Flying Saucers (1956), and Speed Crazy (1959) provided a loose narrative as Joe Dante cuts between the science fiction, monster movies and teen flicks. This narrative is frequently interrupted by commercials, primarily form Bayer Aspirin and Colgate (with GARDOL!). The Bayer ads were downright jaw-dropping as in one, an elderly couple is being removed from their home as it is demolished in the background with landlord in the foreground... "Bayer, strong medicine for sensitive people."

The war wasn't the only top ic that Dante's editing choices provided a sense of cynicism. Probably the most outrageous clips were those that were critical of America's religiosity. There was a hilarious and downright anti-semetic clip from Queen Esther (1948). Included is an Andy's Gang segment where Jesus Loves Me is sung with a crowd of screaming children. The clips from Andy's gang, hosted by Andy Devine, are quite disturbing. They feature musical instruments being played by a black cat and hamster, that I'm pretty certain were taxidermy. And the rendition of Jesus Loves Me goes on too long. It is quite unsettling piece of horror in television aimed at children.

My personal favorite piece of Christian television was a commercial from the Judeo-Christian Brotherhood for a denial and self-sacrifyce package that included a whip, pincer, and stocks & bondage. You could the the package for $19.95 elsewhere, but only here is is available for $39.95, because it is better to give than to receive. I cannot help but to wonder how that particular advertisement could have possibly been real. Where in the world did Joe Dante find this stuff?

And then there were the 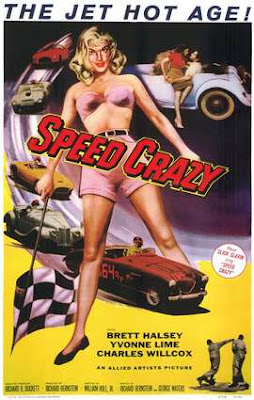 movie Jokes. A favorite that was visited again and again was to show the opening titles of a movie (i.e. The Return of Rusty (1946), followed by one brief clip (A boy excitedly greeting a dog, "Rusty, you've come home!"), immediately followed by "The End". This was a gag that never got old. The Queen Esther clip was presented this way, and sometimes, this formula was altered. For instance, we see the opening of the film noir, The Naked City (1948), which cuts to a clip from a silent nudie film of two women bathing in a pool, which again cuts to The End. The Movie Orgy is full of silly moments.

The bulk of the movie's humor comes from two films, College Confidential and Speed Crazy. College Confidential has bombshell Mamie Van Doren accusing a sociology professor (Steve Allen) of corrupting the students with his pervy, sex surveys in order to excuse her own late night rendezvous with boys. Repeatedly returning to scenes of college students partying add plenty of pulp to interweave between some educational films about going to the high school prom. And then there was Speed Crazy, with an insane protagonist that is constantly reacting with violence because "everybody's always crowding" him. This is a line tha 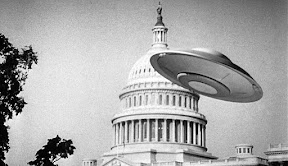 The climax comes with a frenzy of intercut clips of all of the monsters attacking. We seen national monuments being destroyed by flying saucers, mushroom clouds, giant grasshoppers overwhelming armies, a huge tarantula emerging from an explosion, giants, the world's most enormous gila monster, King Kong, a giant mutant bird creature, and the death of the 50 foot woman. And with all of these world ending attacks going on, the heroes also emerge to give aid. Sky King, Robin Hood, Superman, the Texas Rangers, Rin Tin Tin, the Lone Ranger, even Mighty Mouse appear to save the day. Although, only Superman gives important lessons in responsibility and morality along with the much needed saving the world skills. When Superman catches a thief in the act, he learns the important 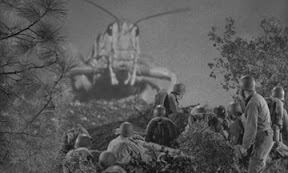 lesson that he should have learned to save, so he wouldn't need to steal.


And now, here is some good tips on how to survive an atomic attack.