2012 is shaping up to be a very strong year for action cinema. The first movie I saw this year was Mission: Impossible - Ghost Protocol which features the trilling sequence with Tom Cruise dangling off the side of a mile high building. Then there was Stephen Soderberg's Haywire with MMA fighter, Gina Carino, where we get to watch her kick everyone ass. Viral Factor is the first of Dante Lam's HK action flicks to show in the multiplexes. And while it is a mess of a movie, it does contain some very tightly choreographed and nicely shot sequences. But the most exciting action cinema to appear so far this year is an Indonedian film from Welsh director, Gareth Evens, The Raid: Redemption.

As a fan of Asian cinema, especially Asian action cinema, The Raid: Redemption is as an opportunity to see a film from a part of Asia that I know very little about. Indonesia doesn't appear to have a long, film history. Since the 1960s, there have been only a couple of films made each year and was subject to much censorship that limited the industry to action movies and pornography. With regime changes over the last decade, many more films are being made and Indonesian cinema is just beginning to show up in film festivals. And like my first exposure to the cinema of Thailand, it is a martial arts movie that is the first movie from Indonesia that has found its way to the screens here is the US. The plot of The Raid is pretty typical of the genre. The Raid opens with the hero, Rama (Iko Uwais), showing off his physique by doing pull-ups before kissing his pregnant wife goodby before he joins the rest of a team of highly specialized police officers to raid the 15-floor apartment building, where evil crime boss, Tama (Ray Sahetany), rules from the top floor. The movie is structured like a video game, with the police entering the building and moving up each floor to get closer to their target. However, after clearing a couple of floors an alarm is sounded and it is announced that there are unwanted intruders in the building and that there's good money in dispatching the police. Quickly, the team is reduced to a small group of officers with mad martial arts skills who are just trying to survive having entered this building crawling with machete wielding killers.

But the plot is not the reason to see The Raid, it is the martial arts. The star is the Indonesian martial art, Pencak Silat and the hand to hand combat scenes are the most riveting parts. From what is showcased, Silat is a particularly brutal martial art with a focus on strikes to the head, neck and spine, every blow appears deadly. The star, Iko Uwais was discovered by the Welsh writer, director while making a documentary on the martial art, but he isn't the most memorable here. Yayan Ruhian, who plays Tama's #1 henchman, Mad Dog, is incredible to watch. 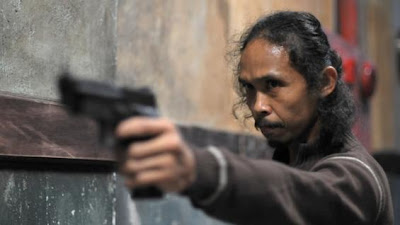 While the fight sequences are well choreographed set pieces that beautifully demonstrate the skills of the stars, the filmmaking lacks the innovation and vision that sets the great action films apart. But the shots are solid and the action is shot with a steady hand at enough of a distance to follow the geography of the scene. What it lacks is the carefully constructed choreography that allows for the breathtaking long tracking shots, as seen in the opening of JCVD, or the innovative use of sets and location as in Tony Jaa's The Protector. Additionally, The Raid is a rather humorless film that really could have utilized a bit of comic relief. But still, despite these shortcomings, The Raid is a truly exciting piece of action cinema. I hope to see Yayan Ruhian in more movies, or at least, more fight sequences choreographed by him. And as demonstrated in this second film from director, Gareth Evans, he does seem to have a talent for finding martial artists and the skill to film solid action sequences. I look forward to seeing more of his work in the future.

The Raid
Labels: The Raid