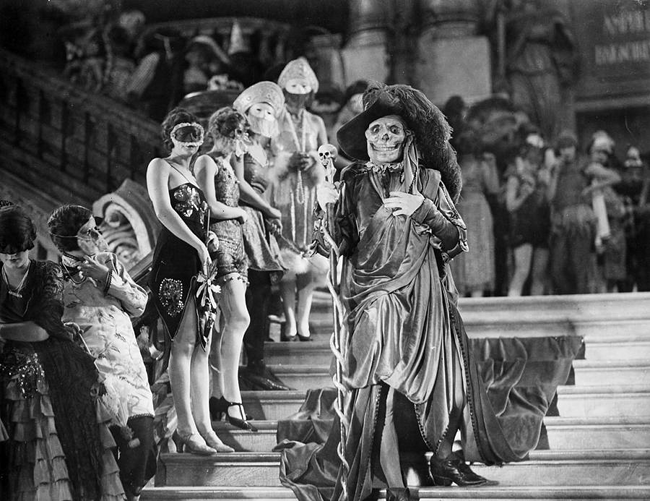 Using the Grand Illusion Cinema's October programming to inform the selections for the October Horror Movie Challenge was not such a bad idea. In the third week of October, they were showing the 1943 Phantom of the Opera in a double feature with Arsenic and Old Lace. Therefore, it seemed like a good plan to see in 1925 Phantom of the Opera with Lon Cheney as the Phantom and I'm glad that I did as the two films were vastly different adaptations of the story.

The 1925 film I do not hesitate calling a horror movie. Both are set in the Paris Opera House, but in the earlier film, it is established that the Paris Opera is haunted. A mysterious figure moves through the Opera house and even has a box reserved for the performances. The ballet's chorus speak of the phantom on hushed whispers, which gives the film the slight unsettling quality of a ghost story. By comparison, in the 1943 version, with Claude Rains as the Erique Claudin, there is no phantom. Instead, Erique is a disgruntled violinist who takes up residence under the opera after being replaced in the symphony. Probably because there was never any suggestion of a phantom before Erique begins to appear to Christine, this version is very different and more melodramatic that the 1925 film. 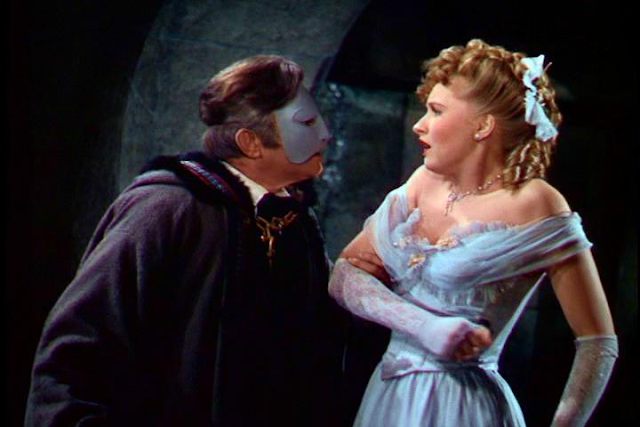 The Phantom of the Opera (1943) is very much a musical. It was filmed in stunning technicolor and so was stunning to see on a new, 35mm print. The sets and costuming was gorgeous and a new musical score was composed for the film by Edward Ward. The film received Oscars for cinematography as well as art design and Edward Ward received a nomination for the music. But sadly, for those who do not enjoy opera or musicals, this version of The Phantom doesn't leave much to contemplate. The plot was altered so that Christine (Susanna Foster) is involved in a love triangle with Raoul (Edgar Barrier) and another opera singer, Anatole Garron (Nelson Eddy). Thus giving an excuse for even more singing to appear. And Erique (the Phantom) was helping Christine advance in the opera by secretly paying for singing lessons, until he is dismissed from the symphony. Then he is injured and hides in the tunnels of the Paris Opera House in an attempt to continue to help Christine. Most of the horror has been excised from this version and instead it plays out at a melodrama that is more interested in the music than the the story of a mysterious phantom.

This is in contrast to Lon Chaney's Phantom of the Opera. In the 1925 version, the phantom is also revealed to not be an ethereal spirit, but a disfigured man, but Lon Chaney depicts Erik as a man who has withdrawn from humanity to live in the depths of the Paris Opera. As a result, he has gone mad, but it is his love for Christine that could save him. When he reveals himself to Christine and professes his love, he begs, "If I shall be saved, it will be because your love redeems me." This makes for a much more compelling Phantom of the Opera, albeit with a whole lot less singing. 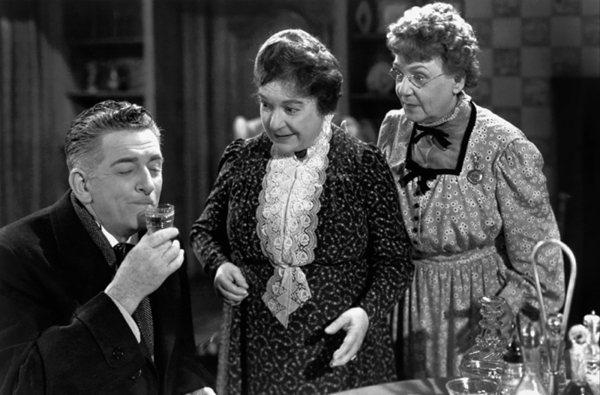 And finally, the other film the was part of the double feature with The Phantom of the Opera (1943) was Frank Capra's delightful madcap black comedy, Arsenic and Old Lace.

As I doubt that there is anyone that hasn't seen Arsenic and Old Lace, I'll dispense with saying much about it, beyond that it was delightful to watch it again. Actually, this was the first time I've seen the film in any other format than on television. The Grand Illusion lucked out with an amazing looking 35mm print of the film and screwball comedies are much more fun to see in a crowded theater.