October 06, 2012
Finished off my silent horror movie private film festival with the 1922, Swedish documentary, Häxan. I see this film in the Scarecrow Video, special October movie section every year and every year, I decide not to rent it simply because it is a documentary. I'm happy to report that I didn't let that stop me this year. 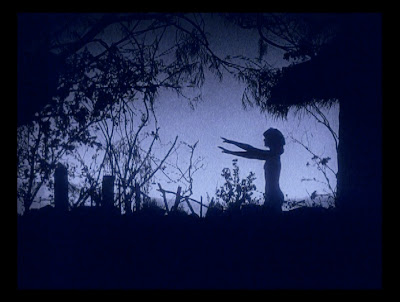 I watched the Criterion release, which is quite a bit longer than other versions (104 min) and includes portions that were censored for the theatrical release. It begins by detailing the beliefs of the universe in the Middle Ages and then spends a lot of time showing artistic renditions of hell. I couldn't help, but to smirk to myself at the number of times the text pointed out nude figures in wood cuts. This was the first clue that in 1922, watching Häxan must have been a bit like going to the ballet in the 1600s or documentaries on indigenous peoples when I was growing up. Yes, this must have been an example of how it is more socially acceptable to watch a scandalous, titillating, and sacrilegious film if it is disguised as a documentary.

After the artist renderings of the misery and suffering of the unfortunate that spend eternity in the depths of hell, the film progressed to discussing witchcraft in the middle ages. Instead of art work, there are dramatizations of the activities of witches. There are women putting toads and snakes into cauldrons and selling a love potion that is used in an amusing dramatization to seduce a monk. 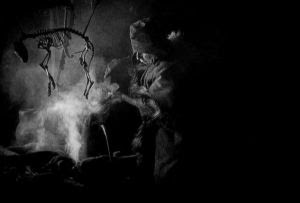 Then Häxan focuses on the inquisition and the European witch hunts and the film examines the methods used by the inquisition by examining one dying man's house hold. Once a religious authority pronounces that a curse is behind the man's suffering, a woman in the house accuses an ugly beggar, Maria the weaver,  of witchcraft. She is captured and tortured until she confesses to being a witch, but in the process identifies other witches in the community including the remaining women in the dying man's home. And thus, Häxan was more aware than expected of the social forces at work during the middle ages as in one of the later chapters, it knowingly points out how many of those identified as witches were poor or suffered medical or psychological illnesses and that the use of torture prompted most "witches" to confess to fanciful tales of sorcery and sacrilege and to falsely accuse numerous other "witches". As a result, as the inquisition's prosecutors traveled from town to town, they never found any lack of witches to burn.

It was the final film chapter that finally caused me some hysertia, when the narrative proceeds to describe just how modern and liberal they are today (the 1920s) in comparison to those barbarians of the middle ages that tortured and burned thousands of innocent women. Häxan dramatically shows a woman suffering from symptoms that would have been due to the influence of the devil in earlier times, but in the 1920s was found to be due to hysteria. The doctor then discusses her condition with her mother, suggesting she be housed in a clinic. Sigh, oh yes, the wonders during this new time of compassionate treatment of women.

I quite enjoyed Häxan. It was fascinating piece of 1920s film making that captures a perspective that we can look back at as somewhat quaint today. Although, in other ways, the images and descriptions of torture and sacrilege are still shocking and horrific. And some of it is just downright amusing.