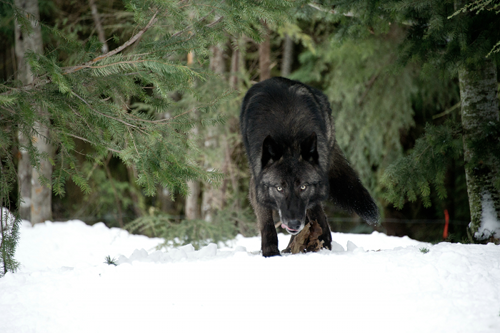 I've apparently reached the point in the challenge where I start to wonder if I like horror movies. Probably a result of seeing a ton of films that I wouldn't have otherwise, but sometimes it seems that my cinematic language is insufficient to talk about these films and my reaction doesn't jive with the consensus. That said, Friday was the late night screening of Sam Raimi's, The Evil Dead (1981) and it was presented in 35mm and a pretty good print. I thought this was the movie that Nate showed me, dismayed that I'd never seen it, that was a stylized and very comic horror movie. Must be getting old, because it wasn't The Evil Dead, but the sequel Evil Dead II, so I waited all movie for a kick-ass chainsaw battle scene that never materialized. Oh, well. My memory might not be so good and thus, more evidence than ever before that I need to write about the films I see as a back for my failing memory.

Ash (Bruce Campbell) and his 4 friends spend a weekend at an isolated cabin in the woods. While settling in, the door to the basement is blown open and while investigating, they find a book and tapes. They listen to the tapes which identifies the book as the Necronomicon, containing ancient Sumerian burial practices and incantations. The incantations are translated and recorded on the tape which seems to trigger the trees to misbehave and demons possess the friends. Ash must then fight off the demons to escape.

Probably due to having seen the Evil Dead II, I misread the tone. The Evil Dead was less comic and more focused on scares and gore which were delivered by the bucket full. The supernatural presence in the surrounding forest provided the point of view, with the camera moving close to the ground and quickly between the trees before returning to the actions of the friends. This gives a sense that they are being watched and adds tension to what otherwise might have been a more formulaic kids in the woods horror movie (or is this one of the originators of that trope).

Once Cheryl is possessed as a result of tree rape, the movie becomes less jump inducing and just plain gr 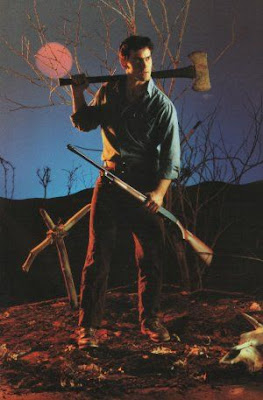 uesome. As Ash's friends succumb to demon possession, he is forced to maim and dismember them again and again. There seem to be endless quantities of fake blood and gore and with so much over the top slashing, whacking, skewering, sawing and hacking, it becomes more humorous than frightening.

And I hate to admit it, but my enjoyment of the film has been detrimentally impacted by recent politics (the war against women) and the obsessive consumption of feminist blogs. The tree rape scene was a disappointing reminder that the horror genre is made by and for young men who don't see female characters as people but potential monsters. I'm afraid it is becoming more difficult to turn off the feminist filter as I watch movies. The rape scene was not at all realistic and certainly didn't push any buttons due to its silliness, but it was put there for amusement, and rape, even by trees, isn't. So with that in mind, viewing Sheitan, with overtly misogynistic characters might not have been the best choice for this October.

Sheitan opens in a night club, STYXX, as the DJ spins a record of that name. This may be the only reference to the Turkish word for satan in the film, although there is plenty of references to his work. From the start, before the movie even left the club, I began to despise it. Bart (Olivier Barthelemy) is brutishly accosting women on the dance floor and when his sexual advances are rightly refused, he responds violently, calling the woman a whore and worse and a fight erupts. He and his friends are ejected from the club and they decide to follow Eve (Roxane Mesquida) back to her home outside the city. Their arrival is delayed by goats in the road and the foursome show their ignorance and discomfort with life outside the city when they refuse to taste the goat milk that Joseph (Vincent Cassel) laughingly sprays at them. And Joseph immediately latches onto Bart, reappearing at his side, introducing him to a country girl, offering him a bottle of goat's milk, pestering him to go to the hot springs and Bart is very visibly uncomfortable with Joseph's manic and aggressive friendliness. 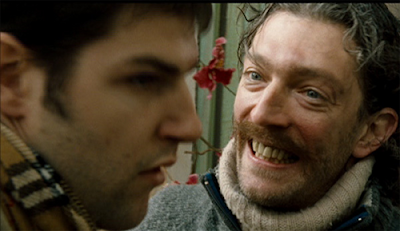 Joseph is the reason to see Sheitan. Vincent Cassel's portrayal of the grounds keeper is both friendly and terrifying. He is a contrast to the young men that have followed Eve to the countryside in order to get laid (they are very single minded about this goal), but also see everything as a threat to their delicate sense of manhood. This is in contrast to the apparently inbred country boys who are overtly masculine and threatening to Bart, Thai, and Ladj. And watching them squirm is one of the pleasures of this unsettling comedic, horror movie. I found this trio so distasteful that I found it difficult to sympathize with their unease and was oddly rooting for Joseph to harvest Bart for his devil doll making project. Having likely misread the tone, which happens a lot when watching movies alone at home, I suspect giving myself permission to laugh at Joseph's dominance of the egotistical city boys would have been satisfying. 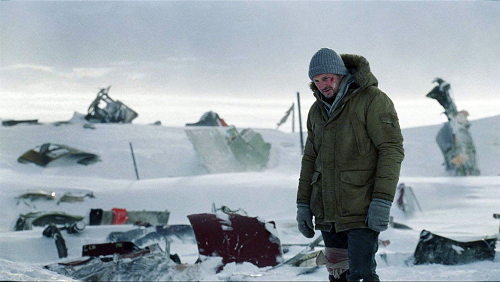 The Grey was a definite high point. Rarely do I see a film that confirms my outlook and reiterated my long held beliefs. America is a Christian nation and I've had those beliefs shoved down my throat from an early age. I also started doubting early. While atheism is not an attribute I seek in the horror movies I watch, its presence was comforting and life affirming in a way that I very much needed. Actually, when it comes to horror, I seek fantasy. The scariest are the supernatural and religious based films, for some reason. Maybe it is simply because I'm frightened by the things I don't have a rational answer to.

Liam Neeson is Ottway and is among a small group of pipeline workers that survive a plane crash in the desolate and harsh wilderness of Alaska. Having lived in Alaska, I know firsthand that survival is the biggest challenge in that situation. And The Grey is very much a horror movie that is of the man versus nature subcategory, although the climate isn't the true opponent. Here nature is an aggressive and ever present pack of wolves that hunt the survivors. And Ottway naturally ascends to lead and protect the men from the huge and terrifying wolves. This a natural choice as Liam Neeson is a very plausible figure of leadership with his authoritative voice and 6'4" stature.

Ottway's survival of the crash is more curse than blessing. Prior to boarding, Ottway had slipped away from the dining hall into the night to put a rifle barrel in his mouth. He is tortured by the memories of his wife, who is ever present. His only desire is to join his love in the grave and this is at the root of his easy acceptance of death and this new role of guide for the small group of survivors. There is no hope for a future as the only inevitability of being eaten by wolves or freezing to death. They know this, but fear and hope prevent their immediate resignation to this. But the wolves are always present, just beyond the light of the campfire as a reminder of this fate.

Not only is The Grey a movie where death is a constant presence, but also a movie where no amount of posturing and toughness will protect them. In fact, this film sneers as the machismo of the Alaskan men that Ottway describes in narration as "Ex-cons, fugitives, drifters, assholes. Men unfit for mankind." When one man challenges Ottway for admitting fear, Ottway shakes it off and replies authoritatively reminding that they all should be scared. Shortly after this show of male posturing and fear denial, the wolves answer the challenge further reducing the band of misfits' number.

There is something about this film that inspires, that touches something deep down inside and readies me to rejoin the fight for survival in a world where survival seem unlikely. Odd so find so much hope and inspiration in a film with a message of the inevitability of death, but that is what I took away form it. Ottway's challenge to the heavens:

Email ThisBlogThis!Share to TwitterShare to FacebookShare to Pinterest
Labels: OHMC, Sheitan, The Evil Dead, The Grey