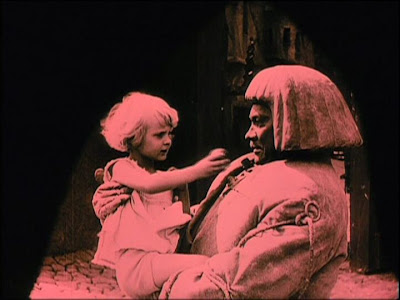 Continuing with the quest to watch more early horror, I selected the 1920 German silent film, The Golem. Paul Wegener's film recounts a legend from Jewish mysticism where a creature is formed from earth and brought to life in order to protect the Jews of Prague from a frightening prophesy.

The film begins with Rabbi Loew with a sequence depicting the stars as round lights hovering above the sharp angles of mountains as he reads the prophesy. With the look of the opening, I wrongly assumed that The Golem was animated, until the Rabbi returns to his home and build the Golem. These scenes while still very high contrast, they were more obviously created with a motion picture camera.  The film was also tinted in reds, greens, and blues.

The plot is somewhat generic and despite not knowing much about Jewish folklore, the tale of the golem was a familiar one. Shortly after the Rabbi warns of the danger seen in the constellations, the Emperor orders the Jews to leave their Praque ghetto and Rabbi Loew, with the help of Rabbi Famlus, summon a demon to give life to the Golem. When the Emperor calls for the audience of Rabbi Loew, he brings his new servant, the hulking Golem. When he shows the Emperor and his court his vision of the exodus of the Jews, they begin to laugh and their laughter causes the building to collapse, but the Golem holds the ceiling up, saving them. So the Emperor rescinds the evacuation order and the Jews celebrate. 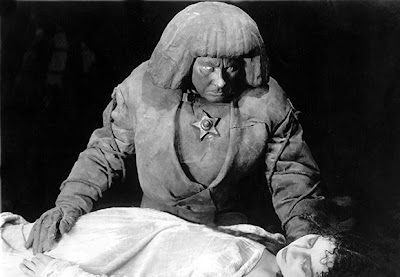 However, there is a second prophesy that the Golem will destroy his creator. And while the village celebrates, the Golem is awakened and begins to destroy the village. This final act of the story is very reminiscent of Frankenstein and the Golem displays a similar development of awareness. The Golem may be huge and lumbering and made of clay, but when he comes upon a group of girls playing, he picks up a curious girl and holds her. The girl removes his amulet and the Golem returns to an inanimate form, dropping to the ground, and the Jewish ghetto is again safe. This film looked amazing, being an early example of German expressionism, but the story did unfold a bit slow for this, modern audience member. Probably because so many monster movies follow the same plot, it was difficult to remain engaged. But still contained some stunning cinematography, so it is noteworthy that cinematographer, Karl Freund, later worked with Fritz Lang on Metropolis.