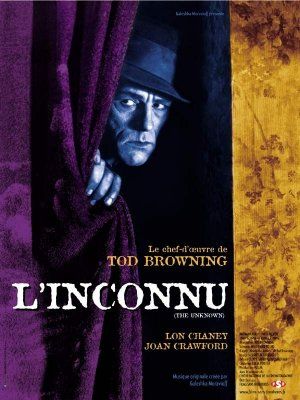 With the whole problem of not having a job, I have time to participate in the October Horror Movie Challenge this year. I've never actually completed the challenge, but came damn close the year I was stuck in bed with a broken ankle. I was only 2 movies shy of watching a horror movie a day for the month of October. Seemed like this would be a good year to try again. Even if I were to only see the movies playing at the Grand Illusion during October, that is still 21 movies, most of which I haven't seen before.

The biggest challenge for me is that I want to blog about the movies I watch. This has become difficult. I've lost confidence when it comes to writing about film since I no longer trust that my brain is in working order. And I worry that with the cognitive issues I've been having, that I'm not making sense. Must remember to proof read.

I started off strong with The Unknown, the 1927 film from Tod Browning. In preparing for All Monsters Attack, I'm considering viewing the original Phantom of the Opera with Lon Cheney and as a result found myself browsing the "silent horror" section at Scarecrow Video. It is fascinating that while I seem to innately understand the conventions of silent film, I've actually seen very few, so I decided to include some in the challenge. 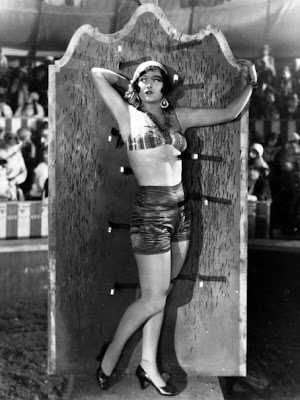 In the Unknown, Lon Cheney is Alonzo, the Armless. He is traveling with a sideshow, where he falls in love with Nanon (Joan Crawford) who is not only part of his knife throwing act, but also the daughter of the ringmaster. Not only does Alonzo pine for Nanon, so too does the circus strong man, Malabar. However, Alonzo has been Nanon's friend and confident and only he knows the reason that she trembles with fear when Malabar attempts to touch her. She fears the hands of men.

But this isn't the only secret. The armless Alonzo is a thief on the run with an unusual deformity that would give away his identity, so he hides it by strapping his arms to his sides. But one night, the ringmaster learns of Alonzo's secret and in a rage,
Alonzo strangles him. What follows is a cascade of tragedy driven by Alonzo's desire to possess the beautiful Nanon while keeping his true identity secret.

The Unknown was great. With a plot that was so focused on hands, arms, and murder I was reminded of a very different film, Santa Sangre, and wondered if this was the inspiration. What I found fascinating was that Lon Cheney's acting style was not as big and over the top as I was expecting. Maybe this was due to the inability to use his hands to portray Alonzo, but in the past, I've noted an acting style more akin to mime, than what I saw here. But I did note other elements that I had associated with silent films of the era. The love triangle and eventual tragedy that befalls Alonzo was very melodramatic. Yes, I liked this one quite a lot. Hopefully, this will be a trend.