OHMC: The Bunker and Prince of Darkness 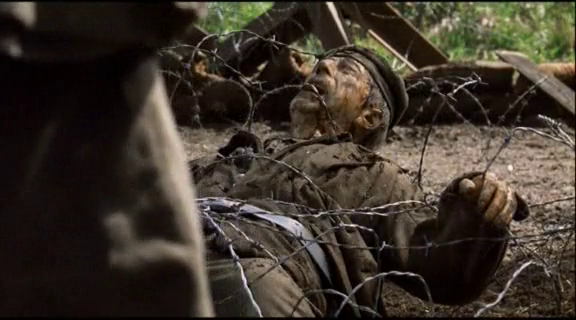 Another disappointing challenge entry and this one looked promising and came with a strong recommendation, too.

Actually, The Bunker starts strong, with seven German soldiers holed up in a bunker in an attempt to survive an attack from American troops while protecting their position at the Belgian-German border. They are running low on ammunition and sleep. Some of the men want to explore the tunnels in search of supplies or an alternate escape, but there are stories about the underground tunnels "and stories don't last for hundreds of years without reason". Some of the men ignore the Sergeant's orders to stay out of the tunnels, claiming those are just ghost stories, but once in the dark isolation of the tunnels, the men start to see and hear things and their actions become driven by fear and madness. This created a very intense atmosphere for a horror tale, but unfortunately it wasn't a memorable or compelling one.

I really struggled to remain engaged with this film. Sometimes I can attribute this to watching a movie in the daylight hours of my living room. It is very easy to be distracted and I much prefer to watch films, especially those in the horror genre, in the dark. But I suspect that this movie just did not have enough plot to hold my interest. Also, while I liked the premise and the general atmosphere, the movie was not very suspenseful. It was very dark, so dark that sometimes it was a challenge to keep track of the characters. [SPOILER]So when it is finally revealed that the soldiers were ordered to gun down a squadron of German deserters, the reveal feels very forced and anti-climatic. In many ways, The Bunker has much in common with Session 9, but Brad Anderson's film took the time to develop the characters allowing one to become invested in their experiences that led to a mildly disappointing reveal, but at least I enjoyed the movie that led up the ending. Sadly, I cannot say the same for The Bunker.

I was excited to find a John Carpenter movie on Netflix that I hadn't seen before, Prince of Darkness; the second film in Carpenter's apocalypse trilogy (The Thing and In the Mouth of Madness are the others). Having just seen The Thing again on Sunday, it seemed logical to continue with this next installment in the trilogy.

Turns out that I'd seen Prince of Darkness. I remember renting it, probably from Tower Records, when I was around 15. And I've never forgotten it, although I had no memory of the name of the movie or any plot elements, which after seeing it again after so many years, it is not surprising. What I did remember was the swirling vat of green liquid that dripped upwards and the ominous presence of the homeless people gathering outside. This makes sense as it is the imagery early on, the threat imposed by the possessed street people outside and the gravity defying glowing green pool that remain the most creepy elements.

And luckily, it still is a fascinating film. Not a particularly good one, but intriguing. Assuming I remember correctly, it seems that the last of a secretive Catholic sect, the brotherhood of sleep, has died and Father Loomis is left with a mysterious room, containing a cylinder of swirling green liquid and some ancient texts. So Father Loomis (Donald Pleasence) asks physicist Prof. Birack (Victor Wong) to help understand these mysteries. And I wish I could give a better synopsis of exactly what either the priest or the scientists were hoping to accomplish by hanging around a creepy church basement, but the handwavy explanations about anti-matter being the physical source of evil left me a bit mystified. Prince of Darkness is absolutely not a Duncan Jones movie with well researched and communicated scientific elements that are logical.  This is my biggest problem with Prince of Darkness;  the ideas behind the concept for the film seemed beyond the grasp of the writers and thus, despite that numerous philosophical speeches from Father Loomis and Prof. Birak, the film becomes a rather conventional horror movie, where the scientists are one by one possessed by evil via satan's green-tinged golden showers.