OHMC: Of Gods and Monsters 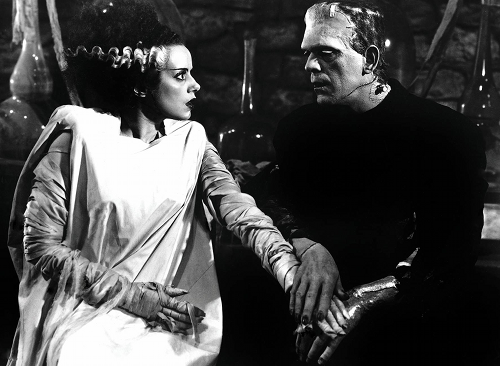 I saw the James Whale biopic Gods and Monsters in 1998, so why did it take me more than a decade to see The Brike of Frankenstein? And why was I taken by surprise by the tone, striking visuals, and humor?

The film starts with a conversatons between Lord Byron, Percy Shelly and Mary Shelly concerning her frightful morality tale about the monster and says that the story doesn't end with the fire at the mill. Not only has the monster (Boris Karloff) surived the fire, but the man who created him, Dr. Frankenstein also survives and is being nursed back to health by his betrothed so they may be married. But one night, the doctor is visited by his mentor, Dr. Petrorius and with a toast "to a new world of gods and monsters" Dr. Petrorius convinces Dr. Frankenstein that they must create a mate for the monster and thus, the plan to create the Bride is born. 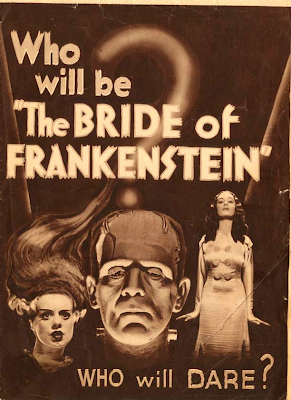 Unlike in Frankenstein, The Bride of Frankenstein paints a very different picture of the monster, one considerably less frightening. Here it is the monster that is frightened and misunderstood. His attempts to approach others are met with fear and attempts to capture and kill him and thus, the monster is humanized. His friendship with the blind violinist is touching in that due to his inability to see the monster, the blind man befriends him and we get a glimpse of his loneliness, but it is also quite funny. The Mel Brooks spoof, Young Frankenstein, doesn't need to add much to this sequence to highlight the absurdity, although the monster's gained humanity is lost.

Although, one cannot see The Bride of Frankenstein without bieng forever left with the image of the monster puffing on a cigar, what gives me the most delight is the compassion the film has for outsiders. The monster is an ultimate outsider and in this story, he is aware of the futility of his desire to find companionship and understanding. And thus, the film makes the monster a tragic figure. And while outsider stories are enduring, it is difficult not to see gay subtext all over this film and I'm not the only one. Apparently, while those close to James Whale insist that any homosexual elements seen in his films were unintentional, it is a widely held reading of the film that the monster's relationship with the blind violinist as an example of same-sex domestic life, complete with the larger societies' disapproval evidenced by the monster being driven out with guns and torches. And the monster's yearning for a friend that is exactly like him can also be seen as a nod toward same-sex desire. And that is really just the tip of the iceberg when it comes to queer readings potentially contained in this film.

Considering the trajectory of James Whale's life and carreer, it is hard to dismiss these readings. James Whale was openly homosexual throughout his career. However, while he didn't exaclty publicise his sexual preference or relationship with David Lewis, it is also believed that his relatively short filmmaking career was a direct result of Hollywood blacklisting due to him becoming increasingly outspoken about his relationships.