OHMC: On a lighter Note 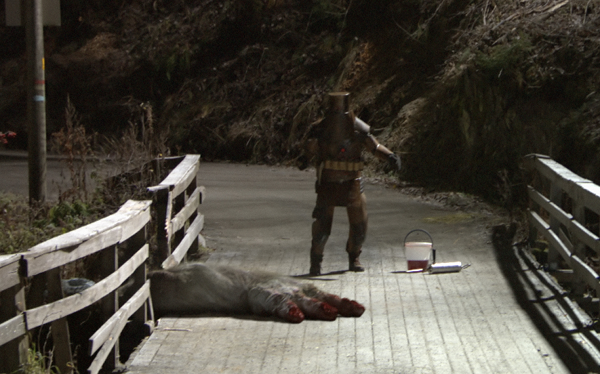 Last week, the October Horror Movie Challenge took a turn towards much lighter fare. Actually, a couple of movies I hesitate to even consider for the challenge, although for my own personal rules for the month, I decided to include any of the Grand Illusion Cinema's Curse of All Monsters Attack programming and for the final weeks of October, the programing has become much more family friendly with more of comic tone. And while I do enjoy truly dark and psychologically troubling cinema, I cannot sustain a full month of movies like The Woman, Snowtown Murders, or even this month's viewing, Sheitan. I'd like to maintain some sanity.

On an uncharacteristically sunny and warm fall afternoon, when scrolling through the netflix queue, Troll Hunter stood out as the type of movie that might be more of a lighter take on horror and thus, not diminished by the freakishly sunny Seattle fall. In this Norwegian mockumentary, a trio of students are attempting to get to the bottom of a story concerning a dead bear. As the experts discuss the animal, they note oddities in the observed bear tracks and some postulate that the bear was shot by a poacher. They then begin to follow a hunter in a van in an attempt to interview him about the bear, when instead of catching him on a bear hunt, they find him following something else entirely. They have stumbled upon a government Troll Hunter, Hans, working to help the government keep the human population safe from these ancient giants while keeping them ignorant of their existence.

After many years spent hunting trolls in the night, Hans is finished with hiding government secrets, so he agrees to let Thomas, Johanna and Kalle tag along and document everything as long as they do everything he tells them to. What is most enjoyable about Troll Hunter is the troll mythology. Hans quickly dispells any myths of fairy tale trolls that wear trousers and can be bargoned with. No, here trolls are huge, smelly, and slimy animals, some over 50 ft, that turn to stone if exposed to sun light. Okay, sometimes they turn to stone, othertimes they explode. And they can smell a Christian from miles away. Trolls really hate Christians.

And so, the troll hunting is documented in a fashion very reminiscent of The Blair Witch Project, until during one troll encounter, the footage suddenly ends. This was an entertaining afternoon diversion. It was at times quite funny and still had plenty of tense moments when it seemed there would be no chance that they would get away without becoming a Troll sanwhich.

The Comedy of Terrors (1963) Dir. Jacques Tourneur
Last week, the All Monsters Attack double feature was two films with Vincent Price, Boris Karloff and Peter Lorre, The Raven and The Comedy of Terrors. While at the cinema, I was needed in the lobby to answer the phone, deal with late admissions, etc. But each time I passed through the theater, there was a lot of laughter. Even the projectionist was laughing along. So I decided to catch up with these at home. Just as well, since the 35mm prints weren't in the best of condition, or at least The Comedy of Terrors was not and had to be projected digitally.
I still cannot believe the cast. Vincent Price, Peter Lorre and Boris Karloff in the same movie. Awesome. Price is a drunk, unscrupulous undertaker and Lorre is his obsequious assistant in this black comedy. When the landlord threatens Price with homelessness if he doesn't pay the year of rent owed, the duo resort to murder in increase profits. Not a surprising plan from Price who is outspoken in his hatred for everyone around him, including his tone deaf, opera-singing wife and her feeble minded father, played by Karloff. In fact, Price is always attempting to give the old man "his medicine" from a bottle a poison he keeps in his pocket and frequently hopes that his wife were a customer, especially when she launches into song.
Here Lorre and Price make a great comedy team in their criminal endeavors. In one great set piece, a series of busts line a stairway. As Price pleads Lorre to be quiet, Lorre topples the bust at the top initiating the domino effect of shattering busts. And then there is the Landlord (Basil Rathborn) who refuses to stay dead. The man is pronounced dead, but minutes later is brandishing a sword while reciting Shakespeare soliloquies.
As someone who doesn't generally enjoy comedies, The Comedy of Terrors was a really fun movie. I should search out The Raven next. 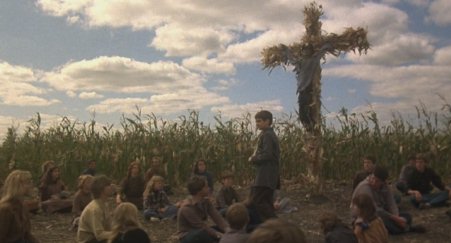 Children of the Corn (1984) Dir. Fritz Kiersch
Growing up, Children of the Corn was a big deal. In 1984, I was 11 and remember classmates talking about this movie as if it were the scariest movie ever made.  I've seen most of the Stephen King penned horror movies of the 80s and 90s, but I never did get around to seeing Children of the Corn. Not that I was missing anything, really. This really is a horror movie for kids. I cannot imagine that it contains a lot of scares for anyone old enough to see this R rated movie without being accompanied by a parent or guardian. The less than subtle message of the danger or religious cults would seem enlightening to my classmates in 1984.
This movie has a problem for adult viewers. It seemed unlikely that even a whole town of kids would so easily dominate Peter Horton and Linda Hamilton. And Linda Hamilton was totally useless here. She was kidnapped and crucified to the corn in minutes and had to be rescued. Totally implausible. I've seen the Terminator movies.
But I can see how Malachi would have been really scary if I were 11. Just not so much today and certainly not with Linda Hamilton around. I don't know how she managed not to spank them all and send them to their rooms.
Tally: 17, 14 FTV