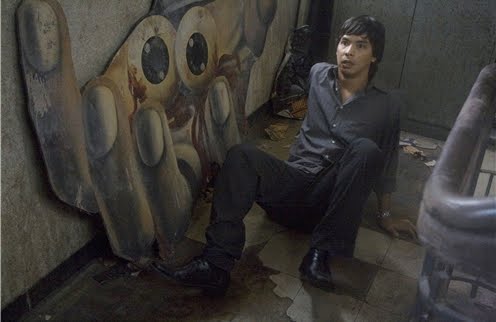 The Screen at Kamchanod (2007, Thailand)

I finally took a gamble on a movie found on netflix. A few years back, Scarecrow video started categorizing their horror selection based on country and while it wasn't unexpected to find a Japanese horror section, the Hong Kong and Thailand horror sections peaked my curiosity. I never did get around to seriously delving into the films that were placed in those sections, but I have found several Thai directors that have become favorites and I started to wonder whether the things I enjoy about Pen-Ek Ratanaruang and Apichatpong Weerasethakul's might be general feature of Thai cinema. So when I read that the Screen at Kamchanod was more atmospheric than downright scary, I took this as an attribute. Sadly, atmosphere was all the Screen had going for it.

Dr. Yuth (Achita Pramoj Na Ayudhya) hears about a mysterious event that happened at a film screening at a temple at Kamchanod. As the projectionist ran the film, no one was gathered to watch, but as it played, people mysteriously appeared and lined up in front of the screen. When the film ended, they mysteriously disappeared. Dr. Yuth believes that if they can find the film that was screened that day and duplicate the event, he will be able to understand what happened that day and perhaps prove that people can cross over to another dimension. But as he pieces together the details, he and those aiding him, begin to believe that they are haunted.

While the premise sounds promising, it just doesn't work. There is no attention to character development or even establishing any relationship between the characters. Towards the end, it seems that Dr. Yuth beats he girlfriend, but earlier it was suggested that her bruises were due to the haunting that began when they screened the mysterious film. And while there was quite a lot of tension and mystery, the film never finds a satisfying conclusion. The problem with the film isn't so much that the incidents surrounding the screening at Kamchanod are never explained, but that the people caught up in the mystery are never fully realized. 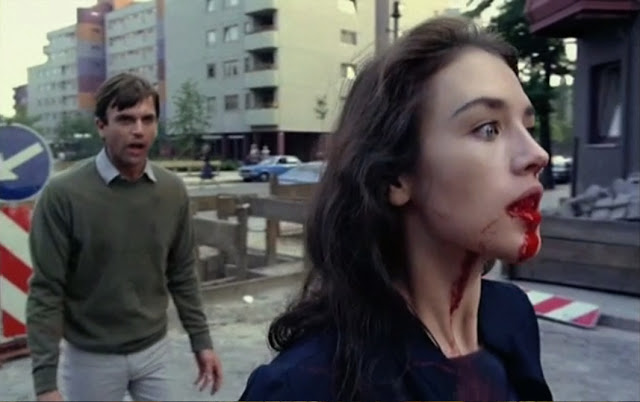 October 5 - 31 is the Curse of All Monsters Attack at the Grand Illusion Cinema. Every October, the Grand Illusion programs a full month of monster movies or other devilish treats for Halloween and the program began on Friday with the return of Andrzej Zulawski's Possession. I had seen the film a few months back for the first time, but had hoped that watching it a second time might allow me to see it with a bit more clarity. Sadly, it did not. I was ever bit as insane and perplexing a viewing experience the second time.

Possession is a complete assault on the senses. Mark (Sam Neill) has returned from abroad to find that Anna (Isabelle Adjani) wants to dissolve their marriage. In their first interaction in the film as she moves strangely and erratically and communicates mostly in screams. And the intensity of these interactions only escalate as every other encounter with Mark leaves one or both of them bleeding. At first, Mark wants answers and discovers that she has been having an affair with Heinrich (Heinz Bennent), but still cannot determine what has happened to change things so dramatically and why she has abandoned him and her son. In some ways, Possession can be viewed as a film depicting the end of a relationship as if the couple have been literally possessed.

Possession is an intriguing film that is a collision of genres and conventions making me uncertain whether to approach this film as a supernatural thriller, a horror film in the of Polanski's Repulsion, a political satire, or art film. I cannot deny that there is a strong misogynistic sentiments expressed, but Possession is so removed from any semblance of reality that it is difficult to analyze from a feminist perspective. This film reads more like live performance theater than film with the unusual clash of inexplicable accents used by the cast and the unreal movements of the actors and the constantly spiraling camera work. Possession is a dizzying and intriguing experience that doesn't permit any depth of understanding.