It is always awesome to watch a modern horror classic with an audience on film. This time last year, I had the opportunity to see Alien and my favorite of the alien franchise, Aliens. This year, my most anticipated screening at All Monsters Attack was John Carpenter's The Thing. The screening I attended was introduced by John Carpenter expert and author Robert C. Cumbow who reminded the audience that the Thing was a remake of the Howard Hawks co-directed 1951 film, the Thing from Another World. I have not yet seen the 1951 film, but Cumbow shared some fascinating observations. He states that in the Hawks film, as was common of a lot of films in the 1950s, the team had to work together to survive and defeat the monster. But Carpenter's film is a more modern take on the monster movie. Since the Thing can imitate any life form, it causes the Antarctic team to distrust one another as anyone could be the Thing at anytime. Thus it is a more isolating film and is attuned to our modern fears. This might be the reason that John Carpenter's, despite being made 30 years ago, remains relevant and scary.

Or as MacReady (Kirt Russell) put it, "Trust's a tough thing to come by these days. Tell you what - Why don't you just trust in the Lord? "

The other bit of trivia learned that night, The Thing was not a commercial or critical success at the time of release. Looking back at reviews from the time, I am shocked at how much critics disliked the movie. Seemed the consensus was that the movie is all about the shock and gore. Maybe it seemed like that at the time and I've just seen too many graphic Japanese and Korean horror films, but I don't see it as an explicit gore fest. But then, I also hadn't realized that it was released just 2 weeks after E.T. so the hatred expressed for John Carpenter's movie might have been a reaction from an audience that just fallen in love with an extraterrestrial, and thus didn't immediately see all aliens as a threat. While I was only 9 in 1982, I did see E.T. in theaters and LOVED it. I can see how that movie would have generated a cultural climate that just wasn't prepared for such a dark and truly terrifying outcome of first contact.

But despite it's failure back in 1982, the film has been reappraised and now stands among Carpenter's most loved films. And it is still a great, scary movie. 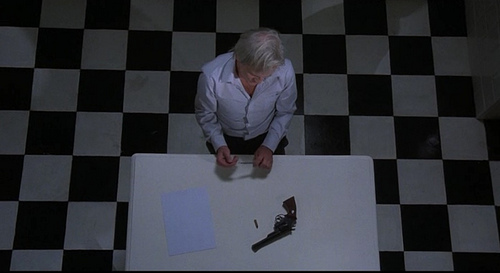 Crawlspace is a rather stereotypical 1980s slasher flick,well  if any movie with Klaus Kinski were typical. Dr. Karl Gunther (Kinski) is a landlord who selectively rents to pretty, young women. In the building is crawlspace access to all of the units, so that he can watch and release rodents into the apartments of unsuspecting renters. But Dr. Gunther has developed a taste for murder and has a tendency to prevent the development of any long term relationships. In fact, when welcoming a new tenant, the other women in the building complain about their inability to keep guys around. But one day, a man arrives with a lot of tough questions for Dr. Gunther about his brother suspicious death while in Dr. Gunther's care. So in order to keep his secrets safe, the doctor starts to pick off his tenants in instantaneous and rather implausible ways.

What keeps Crawlspace entertaining is the crazy nazi that Klaus Kinsky is portraying. Dr. Karl Gunther's father was an unethical Nazi surgeon and the son has followed in his father's footsteps. He keeps a diary where he talks about murderous needs and lack regret or remorse. Although he does regularly play Russian roulette, loading the gun with a single, blood painted bullet (that literally has his name on it) and after surviving another round, utters "So be it". There is a mute woman that he keeps in a cage and a collection of parts in a jars, the souvenirs of his kills. So the characterization of Dr. Gunther could have been used in a film that with some actual suspense, but this one often looks and feels like an 80s sitcom.