On October 26th, as part of the Curse of All Monsters Attack programming at the Grand Illusion Cinema, I attended the Triple Creature Feature. The first film of the triple feature was The Legend of the 7 Golden Vampires, a joint venture from Hammer Studios and Shaw Brothers. As the final installment of Hammer's Dracula series, this is a bizarrely eclectic film fusing Hong Kong martial arts with British actors and Count Dracula.

The premise involves rural Chinese village terrorized by vampires. There is a legend involving this village that tells of a simple farmer who goes to the temple to retrieve his abducted wife and battles the vampires he finds before they can drain her blood. In his struggle with the vampires, he seizes one of the golden bat medallions that the vampires wear and places it upon a Buddha figure while he battles the vampires and their summoned undead. The man is defeated by the vampires, but when a vampire touches the Buddha to reclaim the medallion, the monster is destroyed.  Van Helsing (Peter Cushing) has traveled to China to find this village and after giving a lecture on this legend of the vampires, he is approached by a man who claims to be the son of the farmer that battled the vampires and carries the golden bat as proof. With his 6 brothers and sister, he agrees to take the Professor and his companions to the village to defeat the vampires.

This film is definitely a peculiar take on the vampire movie. Here the vampires looked to be creatures carved from bean curd, with protruding fangs and golden masks. They are killed in the same fashion as other movie vampires, that is via wooden stake through the heart and by the use of religious totems. It is explained that in China, they cannot be harmed by holy water or the crucifix, but can be killed with symbols of the Buddha. But really, the best aspects of The Legend of the 7 Golden Vampires is when the 7 brothers and sister fight off enemies with their advanced martial arts skills as the Brits take cover. Although, once they fight the vampires, the Van Helsing clan became more useful at staking vampires, despite their lack of Kung Fu skills.

The final battle between Van Helsing and Count Dracula, played here by John Forbes-Robertson, is rather underwhelming. Van Hesling reveals High Priest Kah as his nemesis, Dracula, who has been controlling the Golden Vampires. So they fight and Dracula is struck with a spear to the heart and immediately disintegrates, leaving only bones. A bit anticlimactic after all of the kung fu fighting, where else can one find a fusion of the Hammer Vampire movie with a Chang Cheh martial arts movie? 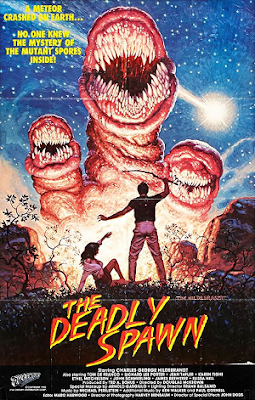 The second installment in the Triple Creature Feature was The Deadly Spawn, a film written and directed by Douglas McKeown and made for only $30,000. And while it likes a low budget, first film, it distinguishes itself by being a lot of fun to watch.

The film opens with a deadly encounter with an alien life-form, that is composed entirely of teeth, after a meteor has crashed to earth. This creature finds its way into the basement of a suburban home, where it grows and multiplies, terrorizing the family that lives above.

The parents are the first victims, but their demise goes unnoticed since it was assumed that they had left in the early morning. Aunt Millie and Uncle Herb are visiting, possibly because Uncle Herb was asked to psychoanalyze the youngest son, Charles. Charles is obsessed with scary movies. His room is papered in monster movie posters and he enjoys sneaking up on unsuspecting family members wearing monster masks. But Uncle Herb doesn't uncover anything truly abnormal in his psychological evaluation other than Charles likes scary movies and science fiction. His older brother Pete has no patience for his brother's obsessions with science fiction and considers himself a proper scientist. When his friends arrive to study, they bring along an unusual specimen of a tiny dead alien creature. But even after cutting into it, Pete won't even entertain the idea that it could be from another planet and dismisses it as some sort of annelid.

Before long, the creatures begin to wreck havoc and spread all over the house and Pete and his friends stop arguing about where they originate and must focus on just trying to keep from having their flesh ripped off by the things. And they are quickly spreading all over town as in one particularly amusing scenes at Bunny's vegetarian potluck, attended by Aunt Millie. One nasty tadpole with teeth becomes the secret ingredient of Bunny's green sauce and before long, the lunching old ladies are surrounded by a swarm of toothy worms seeking to make a lunch of the guests. They appear from behind and pictures hanging on the walls and under the furniture, biting at the old women's heels as the flee.

Thanks to Charles' imagination and observational abilities, apparently developed from years of watching monster movies, he is able to lure the largest and most deadly of the creatures away from his brother and friends allowing them to escape. And in the end, the authorities arrive and the whole town go to work killing, collecting and burning the things. But unbeknownst to them, there are even more deadly things underfoot than they are ready for.

Yeah, The Deadly Spawn was a blast to watch, even if the print was old, scratched and faded. This bloody monster movie was a fun and campy addition to the late night triple feature. 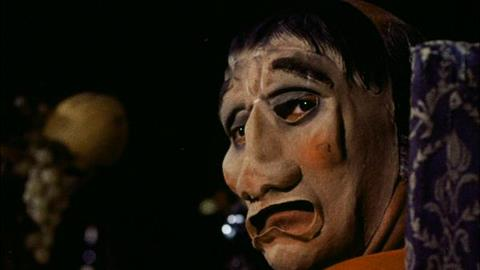 The final film of the night was a post-apocalyptic horror film from Spain. In The People Who Own the Dark, a group of wealthy and distinguished men have gathered at Lily's secluded mansion for a night of depravity inspired by the writing of the Marquis de Sade. But as the men gather in a cellar wearing bizarre rubber masks and the women have taken their positions to begin the hedonistic rituals, the ground begins to quake. When they go upstairs, they discover that the cellar must have acted like a bomb shelter and protected them form the detonation of a nuclear weapon, as the maids have become blind. They then depart for the village for supplies and plan to wait out the fallout. In the village, they discover that everyone is blind. The towns people then become an angry murderous hoard after one of the pompous rich dudes begins to kill off the blind villagers. After they return to the safety of the secluded mansion, the men quickly unravel. The doctor goes mad,  believing he is a pig, stripping off his clothes and cowering under the furniture. And the others also become increasingly irrational and violent. But soon the villagers descend upon the manor and no amount of fortifications can keep out the blind, murderous masses.

As a direct result of the opening of the film promising an undelivered glimpse into the hedonistic practices of the elite before morphing into a horror movie where those elite fleeing an angry hoard of common people, The People Who Own the Dark is an unsuccessful political allegory. This is a movie that very much wants to be The Night of the Living Dead, but it falls short. The character development is insufficient to allow one to identify with any of these wealthy men or beautiful women that must survive the wrath of the villagers. And in the end, the reveal that wealth and status is not enough to survive in the aftermath of the apocalypse, fails to deliver the expected punch in the gut. This is a film with an interesting premise, but it is disappointing that it didn't do more with it.