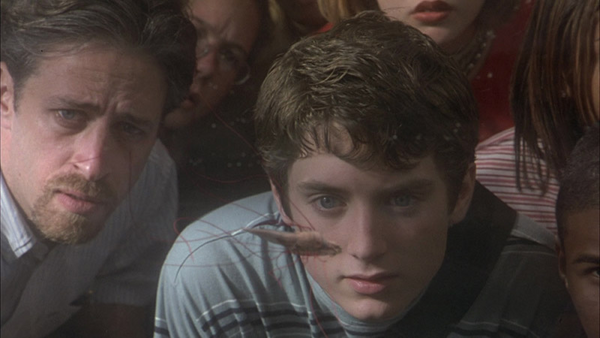 Not certain what took me so long to see the Faculty, being a huge fan of Robert Rodriguez, so when I noticed that it was on Netflix, I added it to the challenge line up. And I'm very happy that I did.

One day, Casey Connor (Elijah Wood) finds something strange in the football field, so he takes it to Professor Furlong (John Stewart) to examine. It is a small creature unlike any that the Biology teacher has seen before and he promises to send it off to the University for identification. But that certainly isn't the only unusual occurrence that day at the high school. There is a new student, Marybeth (Laura Harris) that keeps attempting to befriend the school outcast, Stokes (Clea Du Vall), and the teachers are acting strange. After sneaking into the teacher's lounge in an attempt to find a story for the student paper, Delilah (Jordana Brewster) and Casey dive into a closet when some teachers enter the lounge. In that closet, they not only find the body of one, very elderly teacher, but see the Coach (Robert Patrick) and the drama teacher (Piper Laurie) attack the school nurse (Salma Hayek). They come to the conclusion that the teachers have been taken over by aliens, like in Invasion of the Body Snatchers and set out to find and kill the "Queen" to that their teachers and classmates will return to normal.

The movie knowingly borrows from numerous science fiction/horror movies, with a wink and a nudge, so it comes as no surprise that the screenplay was written by Kevin Williamson who was behind the Scream franchise. But I suspect it was the direction of Robert Rodriguez that resulted in my not caring that The Faculty was largely a lesser remake of John Carpenter's The Thing. It had great pacing and a lighthearted tone that kept the Faculty fun and exciting, that is it was exactly like watching a Rodriguez film. It lacked the technical innovation and the awesome action set pieces that are trademarks of the projects that he writes, shoots, cuts and scores, but it is still a good time.

Life is turned upside-down when Jane strikes a woman who appears infront of her car. Jane stops the car to see if the woman has been hurt, but Tun, in a panic, tells her to drive away. The hit and run eats at June's conscious, making her return to the site of the accident searching for the woman, while Tun cannot seem to photograph any event without the negatives containing numerous artifacts making then unusable. As there is nothing wrong with the camera, it is suggested that a ghost is responsible for the unusable photographs and the photo technician illustrates with large collection of ghost photographs. But before long, Tun isn't only seeing ghosts through the lens of his camera, but is plagued by nightmares, physical pain in his neck and back, and many of his friends commit suicide. Shutter follows Tun and Jane as they attempt to understand the source of their possible haunting in an attempt to bring an end to it.

One is tempted to decry that Shutter is and yet another asian horror movie with  a spooky ghost, with long disheveled hair, but in my attempt to understand the origin of Asian ghost stories, it seems unreasonable to ask why all movie depictions of Asian ghosts are women in white with long hair. Yurei, or Japanese ghosts, are spirits that are kept from a peaceful afterlife usually as a result of a violent death. And they are traditionally depicted in funeral attire; white kimono with their hair left down. And similar funeral customs exist throughout Asia - so Westerners need to chill on this trope being so overused. Actually, the Thai ghost is even more disturbing as they are frequently a beautiful woman's upper torso, that floats in a long gown obscuring her entrails. Now that's a horror movie image that thankfully, wasn't included in Shutter, or I would have had nightmares.

But more relavent to Shutter is the focus on ghost photography. Apparently, in Thailand belief in ghosts is very common. And a quick google search on Thai ghosts led to sites of thai ghost photography, so I have now seen a thai ghost or two. Apparently, the Thai take the occasional incidence of a double exposure or lens flair very seriously, but then haven't we all wanted to believe in some kind of afterlife and found a haunting photographic artifact to be a suggestion of another reality? I took a photograph once that I was certain had the image of a ghost, and I've never believed in ghosts.

Shutter is a very effective scary movie. It is very curious about ghost photographs and the protagonists attempt to rationally explain the ghostly apparitions, but they reappear despite their efforts. Shutter proves that the spooky occurrences are due to a haunting and does so in a way that doesn't neglect the plot, because it is also about Jane learning about Tun's past. He is the one who is haunted by a college girlfriend, Natre. I like that after the movie is over and the ghost is revealed, there were so many clues of her presence throughout. This one is a pretty good ghost story, which is certainly why there have already been several remakes.

How did I miss this Brad Anderson movie? Granted, he's not Robert Rodriguez, but I usually enjoy his films. After starting off making decidedly offbeat romances, he has been making primarily horror movies. Session 9 is one of my favorites as the setting in an old mental hospital is beyond creepy. While some have been ultimately disappointing (The Machinist), I never fail to appreciate what they are attempting. Kafka-esque horror movies still sound like a great idea.

Vanishing on 7th Street begins strong. Paul (John Leguizamo) is working as an AMC movie theater projectionist in Detroit when the city suddenly goes dark. And during this blackout, the people have vanished leaving abandoned cars in the streets and even their clothes in crumpled piles presumably where they were when the lights went out. The visions of an abandoned city is chilling and reminiscent of what some have suggested the world might look like come Judgement day. There are small number of survivors; Paul, a projectionist, Rosemary (Thandie Newton) left the hospital for a cigarette break, and Luke (Hayden Christensen) wakes to an abandoned city. They, along with James (Jacob Latimore) who was looking for his mother when the lights went out, try to figure out how to survive the darkness.

I admired Vanishing on 7th Street for the total lack of explanation of how the darkness was making people vanish, leaving it up to the viewer to decide for themselves what kind of dangers might be lurking. And it was a great source of fear and suspense. I think it would have been enhanced with sprinkling a few clues about what was behind the darkness, instead of just giving absolutely no hint to the nature of the increase in night and the failure of artificial light to protect from the growing night. So perhaps the strength of no ridiculous premise of the source of the disappearances was also a weakness in that in retrospect makes me want more hints to the source the threat. So Vanishing was not without problems, but I found it adequately suspenseful and enjoyable for an October Horror Movie Challenge viewing.