Someone says it at the end of every year. Last year was the best year in cinema that I can remember. Well, as I was thinking about the movies that I watched in 2012, I can honestly say that 2012 stands out. Personally, 2012 was an especially tumultuous year, dealing with increasing physical impairment and a sudden end to the career that was built over the last 15 years, but it the year at the movies was one similarly marked with evolution alongside nostalgia. The movies of 2012 definitely speak to the fact that in 2013, the theaters that remain will be digital. It follows that the movies have quality of reverence for the past, but the year also embraced change and demonstrated forward momentum and innovation. There was so much to love in 2012, that I doubt that I will be able to edit my list down to 10. 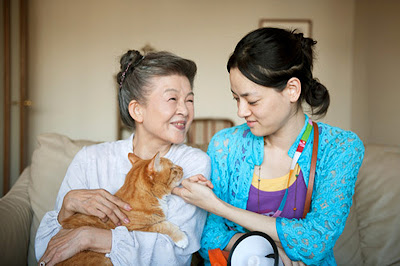 The first trend is the dominance of female protagonists and movies made by women in the films that were among my personal favorites. Looking over my personal list of noteworthy cinema from the past year, half featured a woman in the lead and 5 were directed by women. Kathryn Bigelow's Zero Dark Thirty has been unfairly criticized for the graphic torture sequences, but it is more noteworthy for the revelation that a woman, working in a totally male dominated war zone, was the one to find the most infamous of terrorists, Osama Bin Laden. In Take This Waltz, director Sarah Polley expertly crafts a film that captures the evolution of a long-term relationship as it slowly comes to a conclusion. And in Rentaneko, a Japanese film from Naoko Ogigami that will likely never get a wide release, Sayoko (Mikako Ichikawa) is a crazy cat lady. Her life is filled with the felines that befriend her and she runs a less than lucrative cat renting business renting to those in need of the kind of companionship that can only be provided by a cat. While the film teeters on the edge of saccharine, Rentaneko never allows the quirky kawaii to completely overwhelm. At its heart, Sayoko may imagine alternative lives of grandeur, her reality is that of a lonely woman who has filled her life with a stable of loving felines, but who is always being reminded by a cruel neighbor that she has never found that ideal human companion to share her life with and probably never will. But the movie is not sad, but about filling the holes in one's life. Sayoko helps others improve their lives by lending a carefully selected cat, but her life is enriched by the service she provides. These films share a commonality of having a uniquely feminine outlook, which has long been a perspective that is under-represented in film. 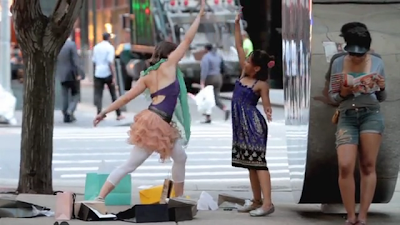 Another unique trend was films about the wonder of dance as an artform and the ultimate expression of joy. The innovative documentary from Wim Wenders, Pina, about German Choreographer Pina Bausch was nominated for best documentary at the 2012 Oscars, but opened in Seattle early in 2012. Pina is absolutely magical and succeeds in giving a complete picture of the work of PIna Bausch without the interruption of monotonous talking heads. Wenders just masterfully captures the work, letting the art speak for itself. What is presented shows her choreography as daring social commentary, whimsical, and sometimes just completely joyous. But even more surprising is the film Girl Walk // All Day. In this on-line video series that has been presented as a feature film in select cities, the Girl (Anne Marsen) rejects the serious formality of ballet class and she dances away onto the streets on New York City. In the city she meets and dances with The Gentleman (Dai Omiya) and The Creep (John Doyle) as she dances with complete abandon among the sometimes curious, often disinterested, occasionally antagonistic cohabitants. This film cannot be described in any other way than as a celebration. It is impossible to remain still and not be infected with The Girl's outlandish and downright thrilling dance through the streets, shops, and alleyways. The film is obviously improvisational and uses the random meetings with street dancers, curious children, and occasional movement dialogs to tell a coherent narrative of the love for dance and an embrace of the unique dance culture found only in NYC. I dare anyone to watch Girl Walk // All Day while remaining totally still and without becoming completely enamored with the Girl. 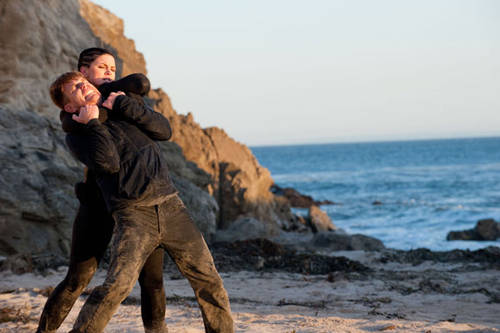 Initially, I was tempted to name 2012 the year of the action movie. One of the very first films I saw in 2012 was Soderberg's Haywire. It was absolutely thrilling to watch martial artist Gena Carano fight, although, I do admit that my interest was primarily sparked by the rest of the cast, primarily Ewan McGregor, Michael Fassbender, Antionio Banderas, Oh, my. But once Gena started dominating the action scenes with her obvious power and strength, I was captivated. And one cannot just watch the fights in Haywire, without wincing at the blows. Although Haywire was not the best martial arts movie of the year. I'd have to give that honor to The Raid: Redemption. Like the many Asian kick-face movies that preceded it, the plot is nothing more but an excuse for elaborate fight sequences. And they are really awesome. But the biggest surprise in the action thriller genre was the bike messenger movie, Premium Rush. David Bordwell wrote an in depth analysis of exactly what makes the movie tick, but for me it delivered exactly what I want in a summer action movie, a thrilling ride that doesn't slow down to catch its breath. It uses very familiar, dare I say Hitchcockian structure, to tell a simple, but always riveting story - and may have had the most racially diverse cast as well. And most exciting was like both The Raid and Haywire, Premium Rush depended upon the use of practical effects over CGI. Afterward, I eagerly looked forward to mounting my bicycle for the trek home. 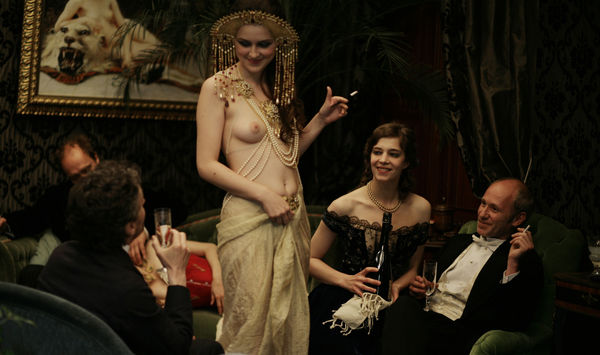 And then there were the revenge flicks. Quentin Tarantino's Django Unchained and Bertrand Bonello's House of Pleasures. What was most striking was the similarities. Like Tarantino, Bertrand Bonello approached a period drama utilizing film making techniques and music that stand out as shockingly modern in a turn of the century Parisian brothel. This stands out as a warning that House of Pleasures is approaching the subject matter of selling womens' bodies with a present day judgement of the practice. In the lush, beautiful, and unnaturally languid environment of the brothel, the horrors of the work there are offered up and highlights the othering of women created by objectification. While Django Unchained approaches the historical reality of slavery with equal parts of humor and justified horror and outrage, House of Pleasures is more even in tone, but both films find catharsis in rage against the inhumanity of the flesh trade. And I was moved and greatly impressed by both. 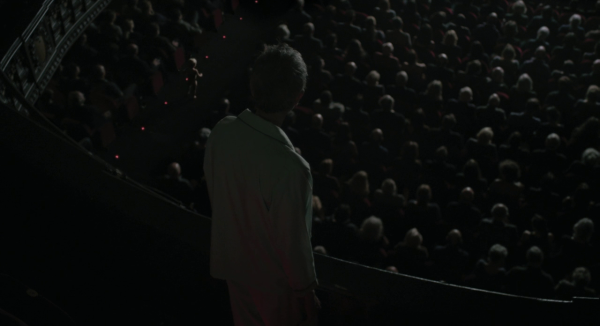 But the best movie I saw in 2012 was Holy Motors. It begins with a man, played by the film's director, Leos Carax, waking and inspecting a wall papered with a forest. He searches the two dimensional forest with a key, that protrudes from his finger. Finding the keyhole, he walks through the hidden door into a theater, where a sleeping audience awaits. I've heard the film likened to a dream or to be a completely meta experience of a film about film.  I see it as a timely eulogy to the passing of film cleverly told as an allegory of a man's work day that seems to represent the phases of life as if they were movies. And I have no way of knowing if this is what Carax intended. But regardless of how I interpret it, Holy Motors is a completely absorbing movie-going experience that delights in each small narrative that begins as Denis Levant steps out of the limo in costume. And each of these small stories exist in a world of their own, whether he is leading a band through the streets while playing an accordion, playing the part of an old man taking his final breaths in the presence of his grieving daughter, or to emerge only to begin running on a treadmill while shooting a gun. Very little is explained in this alternate universe, but the vision is so filled with delight at the magic of cinema that I found very little need to understand it. It was enough to see it.

There are many more great films that I haven't gotten around to talk about. I'm not certain any of these are in fact more worthy of attention than the others in my list, these are simply the ones that I was inclined to say a few words about. 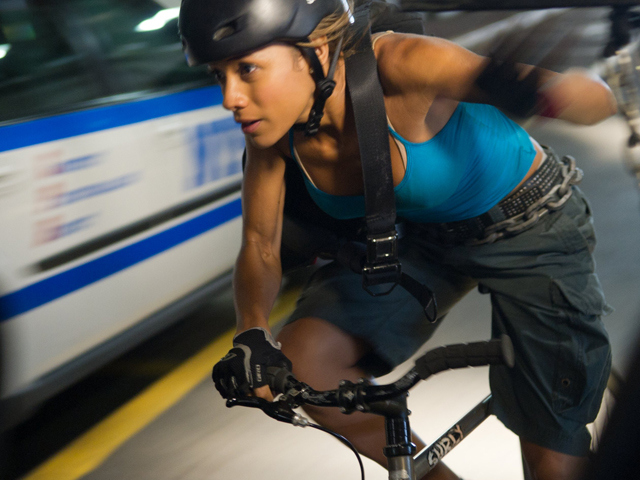 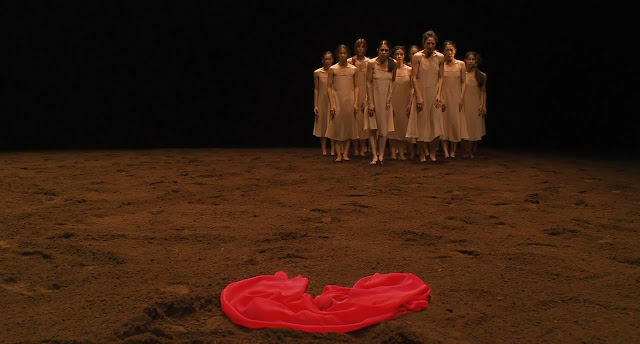