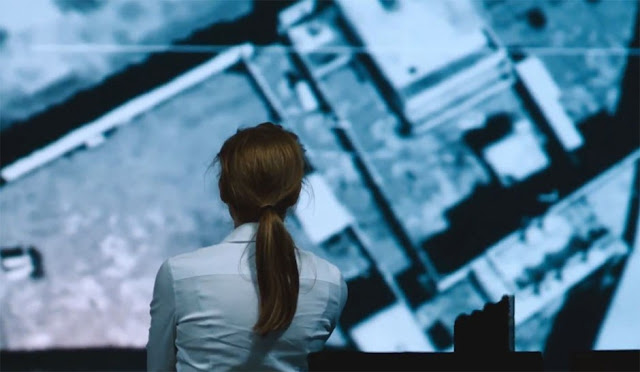 Kathryn Bigelow is a director who's career has always been of interest. Not only is she the only woman to be awarded the Oscar for for directing her previous film, The Hurt Locker, but her films practically ooze testosterone. Not only are they in the male dominated genre of the action movie, but they tend to have an exclusively male cast. Bigelow's films are in the world of men and are concerned with the stories of men and while I've liked many of her films, I have been mildly disappointed that such a talented director is not interested in bringing more female-centric narratives to the screen. But Bigelow has a female protagonist in Zero Dark Thirty and I would even go so far as to call this a feminist achievement in cinema. The procedural detailing the process of tracking Osama bin Laden's location and coordination of the the attack on the compound only had three female characters among the seemingly all male military and government, but despite being such a small minority, Zero Dark Thirty manages to pass the Bechdel test. It is sad that today, so few narratives include more than one female character, but here in a film with a setting that insures that nearly every character will be a man, the female protagonist is highly competent, powerful, clever, and not sexualized and the same is true for the other female characters.

Zero Dark Thirty is a film that is single-minded in its focus on Maya's (Jessica Chastain) hunt for Osama Bin Laden that opens with the chilling real audio from those inside the the twin towers on 9/11. It is a nationalistic revenge story that uses our collective memory of 9/11 as the justification to use extreme measures to insure that Osama bin Ladin is killed. When Maya enters this narrative, it is two years after 9/11 and she is observing a man being tortured for information on the Arab Front. This is new to her and when given the option to watch via monitor, she refuses and returns to the cell where the captive is being held. For a moment, she is left alone with the mostly naked and badly beaten man, he pleads to her for mercy. Her only answer is "You can help yourself by being truthful". Just because Maya is a woman does not mean she is compassionate.

Actually, that is exactly what impressed me about Zero Dark Thirty. There was no attempt to soften and feminize Maya. She is 100% focused on finding Osama bin Laden. She is depicted working, going to and from work and nothing else. There is no hint of her past, her family, or any aspect of her life outside of the CIA offices and interrogation rooms. On the team to track down Osama bin Laden is one other woman, who asks Maya if she has any friends. This exchange verifies that Maya has no life outside of her job.  Maya is not at all a stereotype of a working woman. Instead she is portrayed as driven by an all consuming desire for revenge and this drive pushes her to follow leads that others in the agency have dismissed.

There has been a lot of focus on the use of torture in Zero Dark Thirty in the media. This again suggests that those making the criticisms have not watched the film that they critique or they are not very good at reading motion pictures. Depiction of torture is not the same as glorification. In the first scenes, Maya is observing Ammar's  interrogation and while she does not interfere, she struggles to maintain her composure during the interrogation. In addition to the the decision to show Maya's evolution from someone who winces at the sight of inhuman treatment of detainees to someone capable of making the call to subject someone to those same techniques in order to get information. However, the film does comment on the change in administrations that is not on board with using torture to get information. Also, in pivotal scenes where the information that leads to the discovery of the compound were found not by torture, but through bribery, interrogation of a detainee using coercion and confusion, and the most important lead was discovered in files that the CIA already had. So despite torture being used in the film, it isn't glorified or even shows it to be affective in getting reliable information. The key to tracking down a man who does not want to be found is in intelligence and tenacity.