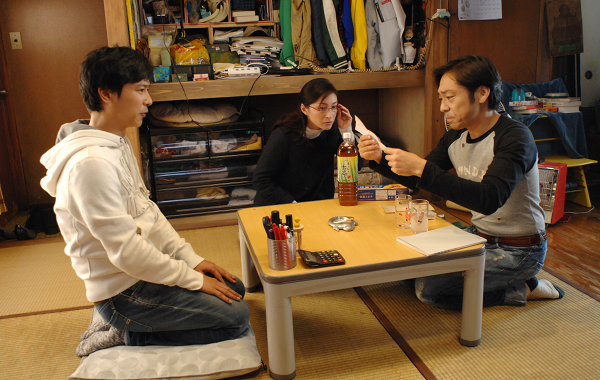 I love Japanese cinema. And probably in part due to the Seattle International Film Festival, I discovered that contemporary, non-genre cinema from Japan can be amazing and film festivals are the only places to find these films. Sure some Japanese movies make it to the theaters each year, but these tend to be horror movies or Anime. We don't get many opportunities to see the other types of movies that are made in Japan.

Key of Life is surprising because it really shouldn't be good. Any plot synopsis that essentially claims it's like Trading Places in Japan, except Dan Aykroyd has amnesia, does not sound promising. So I honestly don't know how director Kenji Uchida pulled this off.

There are three characters, Kanae is a successful and very detail oriented business women who decides to get married. So she puts her wedding day on her calendar and informs friends, family and colleagues of the impending date. The only problem is that she hasn't met the groom just yet. But she's given herself 4 weeks to meet him and another 4 weeks to get to know him. Sakurai's acting career hasn't exactly taken off. He lives in a dingy apartment and is behind on his rent and has no prospects for making money, so he attempts to hang himself. Although this doesn't have the intended consequences and so he goes to the public bath. And finally, Kondo enters the picture. He is an assassin and because of his line of work, is extremely meticulous, but also necessarily socially isolated. Kondo unknowingly enters Sakurai's life when at the public bath, cleaning up after a job, he slips on a bar of soap and is knocked unconscious  His locker key lands in Sakurai's hand and they switch lives when Kondo wakes in the hospital with no memory of who he is and only has the contents of Sakurai's locker to inform him about his identity.


The movie that unfolds is somewhat predictable, at least at first, but is also very smart in the way it uses genre. Sasato Sakai, plays Sakurai as if Key of Life is a farce. The comedy is very exaggerated in many of his scenes, but Teruyiki Kagawa plays Kondo very straight. Although, he has no memory of being an assassin, he enters Kakurai's life as if he is in a noir mystery that he must get to the bottom of. And so Kondo goes to work figuring out the sad realities of Sakurai's existence, even finding the rope that was used in the suicide attempt. Meanwhile, Sakurai is attempting to fill Kondo's shoes as an assassin and eventually needs help getting out of his new found life of crime.

Having some experience with Asian farces, I was concerned at the onset of Key of Life, but by the end, I was won over. The characters are extremely likable, and plot has some surprise twists and turns, and I loved the romantic turn at the end. It looks like Film Movement is distributing this film, so maybe there is a chance of Key of Life finding an audience in the states.