Planet earth is blue and there's nothing I can do.

Outer space is such a common setting in cinema that we tend to forget about the realities of space travel. As a reminder, Gravity opens with...

LIFE IN SPACE IS IMPOSSIBLE

After having seen Gravity, it comes as no surprise that director Alfonso Cuaron wanted to be an astronaut. Gravity is a film that is awe struck with the view of earth from space and of humanity's achievements in space. There are numerous satellites, labs, space stations, alongside trash and debris orbiting the planet and Cuaron places his narrative outside one of the stations in this surprisingly crowded landscape.

Dr. Ryan Stone (Sandra Bullock) is in the process of completing a repair at the opening of Gravity, when Houston reports the possibility of incoming debris due Russia shooting down a satellite. Matt Kowalsky (George Clooney) is the veteran space mechanic assisting Dr. Stone, mostly with banter meant to entertain Houston, when they receive word of the debris and in a mind blowing, apparently single shot 13 minute sequence, space junk showers down on them, breaking off an arm from the station with Dr. Stone attached and Kowalsky shouting for her to detach, sending her hurling, alone into space.

Gravity follows Dr. Ryan Stone as she faces the challenges of survival in a local that is unfathomably uninhabitable. Makes one pause to consider what astronauts cope with on a daily basis, as the more man puts into orbit, the more essentially immortal space debris collects, posing this precise threat to the men and women tasked with our collective dreams of exploring what lies beyond this tiny corner of the universe. And thus, we watch in helpless horror as she is flung far into space and impossibly collects her wits and determination to survive even as she floats further away from the space station, loses contact with Houston, and oxygen is running out. 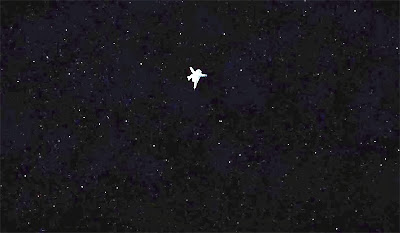 Fortunately, Kowalsky is still with her. He helps her by leading the way toward the stations that orbit the earth. These beacons of hope at least can provide some oxygen and perhaps radio contact. So Gravity unfolds as a tense thriller of only two astronauts. And it is exceedingly tense and action packed. But also, the film is much more than a beautifully designed, choreographed, and shot space thriller. Much of the film is spent alone with Dr. Stone, her rhythmic breathing providing the soundtrack as we listen to her monologues as she continues talking to Mission Control, because just because she cannot hear them, doesn't mean they cannot hear her. So we listen as her survival appears impossible and she finds the will to continue to find a way back. The resulting lyricism is a tribute of Sandra Bullock's ability to convey these internal struggles. What does she have to go back to? Is it worth fighting for, or should she surrender to basking the this glorious place, floating in the heavens while watching the sun rise over planet earth.

One also cannot help but marvel at the technical achievements of Gravity. Alfonso Cuaron took a rather simple concept that was rife with technical shortcomings. It took several years to figure out how to make this film, but the results are a testament to Cuaron's place among the greatest filmmakers of today. This film is a huge technical achievement, but unlike other films that have announced advancements in filmmaking, Gravity is also a great film.

And Gravity is the first film that I've seen in 3D, that elevates it beyond a gimmick. The 3D effects made the action unfolding on screen look and feel real. No silly gimmicks of objects flying toward the camera, just the impact of what it might be like to be in a rain of space junk. And thankfully, there were a few comic moments, one involved Marvin the Martian complete with scrub brush helmet floating by. But now I can honestly say that after seeing Gravity, I completely endorse seeing this spectacular film in 3D, which is a first.