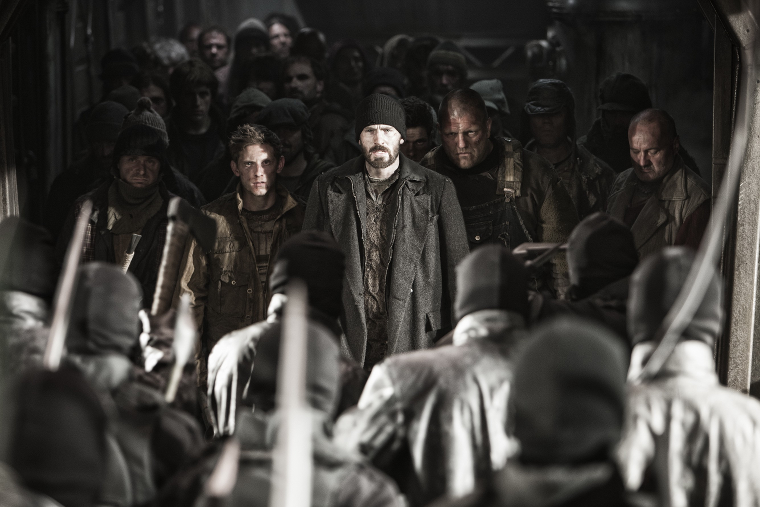 Unlike Locke, which exclusively uses dialog and Tom Hardy's face to construct the narrative, Snowpiercer draws heavily on visual storytelling. In Bong Joon-ho's multilingual, multinational allegorical illustration of capitalism, Snowpiercer is both visually and metaphorically about a quest to overthrow the class structure, by taking the engine of the train. Curtis' (Chris Evans) revolution begins at the rear of the train that houses all of surviving humanity after the earth became inhabitable due to a human induced ice age. The rear is where the underclasses live in the dark, surviving on meals of gelatinous protein blocks. In the quest to take the engine, Curtis leads his band of revolutionaries forward through the train and thus, car by car, visually illustrating upward mobility through the capitalist class structure. Probably, the most striking and funniest section is when they pass through the classroom where a very pregnant teacher (Alison Pill) is indoctrinating the children of the train's upper and middle cars with the story of Wilfred and his eternal train that protects them.

While the focus is on the insane lesson, Namgoon Minsoo (Song Kang-ho) direct's his daughter's attention outside the train in an effort to teach Yona (Ko Asung) about the frozen world outside, a world she knows nothing about having spent her entire 17 years on Wilfred's train. This duo was released from their incarceration in order to open the doors between the cars. They provide an alternative perspective on the revolution underway, that there are other options than to simply move forward.

Snowpiercer is such a powerful cinematic experience because it dares to unfold its narrative using visual cues instead of depending only upon spoken exposition. However, peppered throughout are amazing cinematic moments, like turning the focus away from a gun battle to observe a snowflake drift into the train through a bullet hole. These visual breaks in the narrative sometimes add a touch of humor or whimsy, but also demonstrate the power of Bong Joon-ho's unique cinematic vision.