April 03, 2015
Monday we returned home from Catalyst Con East in Washington DC and it was an amazing conference. Catalyst gathers together the top voices in sex education, therapy, research, among other disciplines to spend two days discussing human sexuality. This year the conference opened with a discussion between Francisco Ramirez, Kristin Beck, Dr. Melanie Davis, and Rachel Kramer Bussel, moderated by Lynn Comella.

This year opening keynote focused on fostering diversity within the sex-positive communities. Looking around the convention, it is not exactly the most diverse group of people. Attendees and panelists may have a broad range of sexual orientations, gender identities, and even abilities, but are overwhelmingly white. It seems this discussion was part of last year's convention, too. But it was good that they are at least attempting to have the conversation.

The conversation tended to focus on positivity and being inclusive, which is a step, but doesn't do enough. Ignacio Rivera added to this conversation with the most insightful comment, basically stating that it isn't enough to attempt to invite diversity into the community, but to actually engage with existing minority communities. Go to their events and give to their communities.

Despite a bit of frustration over the diversity question bringing up too many of the same ideas, there were still so many insights shared. Francisco Ramirez talked about the rights of all people to be sexual, including the homeless and Dr. Davis talked about the difficulties faced by getting messages of sex positivity to the elderly. And there was a much appreciated discussion of the importance of self-care in a  field where too many appear to be working without much financial compensation.

But the biggest surprise of the night was the announcement from Kristin Beck of her intention to run for Congress. She was probably the most positive and optimistic when it came to offering solutions for reaching out to those outside of the sex-positive community.

The most frustrating moment came when Hedwig asked about the place for anger when uncovering the structural injustices that exist in the community. Suggestions were all about the personal processing of feelings of anger, instead of ways the community might work to dismantle the cultural structures of oppression, but that's America for ya. We are slow to catch on to issues of class, income inequalities, etc and the solutions offered always involve personal betterment when we probably should all attempt to run for office. 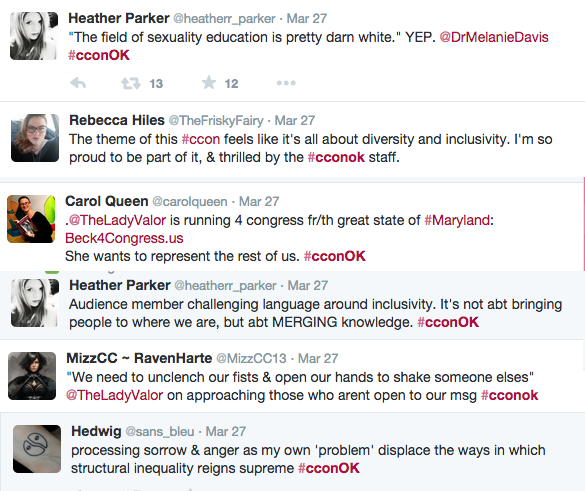