Catalyst Con: therapy is not neutral, it's political.

April 11, 2015
I attend Catalyst Con for the panels and Saturday morning, I was in desperate need of a time tuner. But I was forced to make hard choices and decided to listen to Sheri Winston talk about The Missing Pieces of the Female Anatomy Puzzle. And it was fascinating and it was about so much more than just anatomy.

The presentation began with Ancient Greeks in walking us along a cultural map of female pleasure. It seems that throughout history, female sexual anatomy is inferior. It seems that female anatomy is only interesting in as it pertains to reproduction and that it is the penis that is for pleasure. Thanks to this long standing bias, even today there is very little accurate information of female sexual pleasure and orgasm. But with a vulva pillow in hand, Sheri Winston presented the basic mechanics of female arousal and orgasm. I believed that I was very well informed on this topic, but still learned so much more. 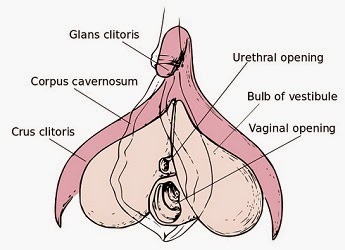 She also showed us the layers of muscle that compose the pelvic floor, a topic that I've been attempting to understand but remains a bit elusive. But the pelvic floor, or PC muscles, are multiple sheets of muscle tissue and not distinct 'muscles'. So when my doctors explain that I have pelvic floor weakness or spasticity, that is far from a specific statement. There is a huge number of muscles encompassed and this is likely why physical therapy is so incredibly challenging.

Sheri Winston also talked about the role of the uterus in arousal. I didn't even know it played a role, but it absolutely does. There's a pair of muscles that during arousal contract to pull the cervix back, lengthening the vaginal canal and allowing for vaginal tenting.

And there was so much more. She covered the urethral sponge, where the fluid some women can ejaculate likely comes from, and so much more. Many of the images came from her book, Women's Anatomy of Arousal. This is a book I would have looked past as having too much woo and not enough basis in science, but is actually the concise and reader friendly literature review that I've been looking for.

And now for a selection of live tweets... 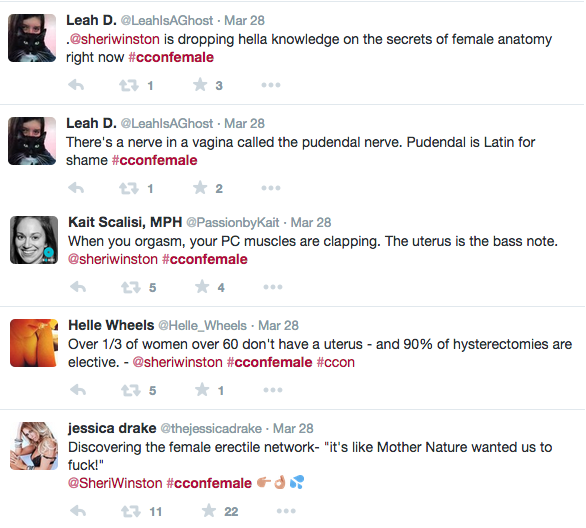 Immediately after, I didn't have time to attend Sheri's book signing, since I was racing off to listen to Chris Donaghue's talk, The Sex Education of the Media: How social media impacts and distorts your sexuality.

This is one of the more challenging talks to summarize due to the tremendous amount of exciting ideas flowing. The main points were that our "social media is a direct link into our psyche." What we put out into the world on these platforms are aspects of who we are and additionally, what we see on-line impacts how we see the world. Who we choose to follow on sites like facebook and twitter impacts our perception of the world. We are always learning and the media bombards us with only the most dominant of social norms. And these social norms teach us who we are supposed to be and we will always fall short.

But on the bright side, Chris Donaghue points out that we can shape what we see on-line to create a world more friendly and accepting by following only those who challenge social norms. If someone is always posting body-shaming articles and images, we can choose not to see what they share. On the flip side, we can find communities in social media that can boost our self-esteem and self-worth. The not conventionally attractive can find validation by posting images of themselves to their social networks.

"Social media is great for queers-


He also talked about how the media reinforces the social and sexual norms for men and women, creating a Mars and Venus model of the sexes that doesn't actually exist, i.e. the battle of the sexes is completely a social construct played on by the media "There are more differences between women than there are between women and men.

Chris Donaghue didn't just talk about the media, but as a sex therapist, he spoke about the inherent sex negativity in psychology. Basically, any behaviour that isn't "normal" requires treatment. Psychology tends to individualize (privatize) and ignores that mental health is a reflects institutions. Actually, this emphasis on self-improvement can be seen throughout so many of the talks at Catalyst that it was refreshing and exciting to here someone touch upon the sociological ideology behind mental health.

In addition, Chris Donaghue, who was trained in sex addiction treatment, is firmly in the sex addiction isn't a thing camp.  Go Team! 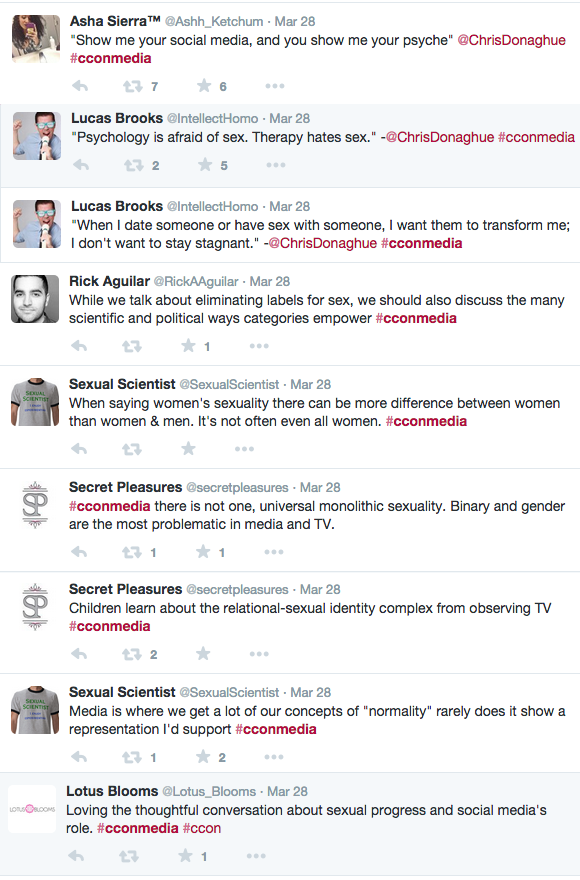