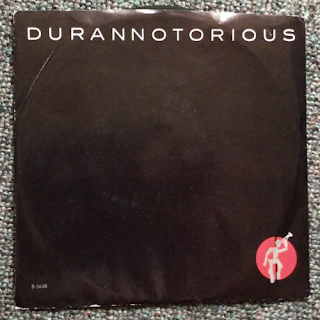 As I'm taking some time to write about music, I just experienced a huge surge of nostalgia on Monday when Nate unboxed a lot of around forty 45s. They were all singles from the 1980s and as you'd expect, there's some garbage in the mix, but there was also the first single from the 1987 Duran Duran album, Notorious. And wow, did it spark some memories.
In 6th grade, I completely fell in love with Duran Duran after a neighbor talked me into buying her extra copy of the live LP, ARENA. After that, I was begging anyone to take me to Tower Records to spend my allowance on anything Duran Duran.
BTW, Arena was probably the second music purchase I made and I still have it. It also still ranks among my favorites. I love that it was so well taken care of that even the poster book is still in excellent condition. 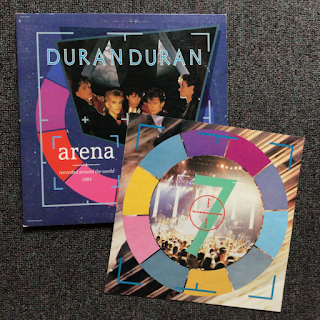 But I had bad timing with the Duran Duran obsession as it happened when New Wave was quickly vanishing form the charts and being replaced by more American centric rock bands like Bon Jovi. And DD was actually disbanded at the time, focusing on side projects like Arcadia and The Power Station. So I was super excited when they released a new single as Duran Duran in 1987 and remember talking my parents into a trip to Tower to buy the Notorious the day it came out. I couldn't remember at first why this 45 felt so familiar to turn in my hands as I had very few, preferring to spend my money on LPs and 12" singles, but I did actually own that 45.
But back to Arena. It is just a live compilation with one new studio track, Wild Boys. So it isn't among the best of Duran Duran, but it was my main introduction after top 40 radio. I know Duran Duran's fame is frequently linked with exposure on MTV, but cable wasn't installed in my area until around 87-88, so I was completely ignorant of their music video at this time. One thing that stands out with listening to Arena is that the guitar is more prominent as it is when seeing Duran Duran live. It is easy to forget that in the early years, Duran Duran was a bit different from their English, new wave / new romantic peers due to Andy Taylor's rock guitar. And this is especially prominent on my personal favorite track, New Religion.
So Arena was the second record I remember getting. After that, it was the entire Duran Duran back catalog, peppered with some artists that I knew influenced them, like David Bowie and Chic.