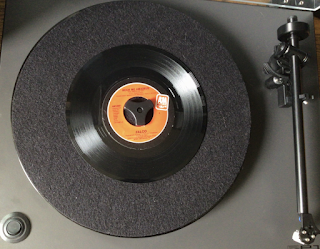 A few years back, I brought my vinyl collection home from my mother's as we had purchased a record player and as a result, I collect records again and listen to music. It was strange, but with the transition to digital, I started listening to podcasts and completely stopped listening to music. In fact, I purchased maybe one new album per year over the last couple of decades. Bringing home the music I collected in my early teen years was eye opening. I still loved it and still love music. Is it the format? I remember the controversy over the switch to CDs somehow changing the music listening experience, but it seemed irrelevant at the time. Was it due to life changes? No clue, but I am listening to music again and loving it.

I didn't manage to find all of my collection at my mother's house. I remember having a small stack of 45s that I don't know what happened to. Among them was the first record I remember purchasing, Rock Me Amadeus by FALCO. Pictured is the 45 found at Goodwill for $0.99. And I still really enjoy that song. One side A is the US release of the song, but the B-side has the more informative Canadian version of the song that includes informative facts about Wolfgang Amadeus Mozart.

The strangest thing about it is that I would have told you I was probably in 4th or maybe 5th grade when I bought it. Turns I had to have been in 6th grade as Rock Me Amadeus was on the US billboard charts in March 1986. This discovery seriously messes with my head as I was positive this was the first pop song I fell in love with, but People are People (Summer 1985), Shout (Summer 1985), and The Reflex (June 1984) all pre-date Falco. So it appears I cannot trust anything that I KNOW to be FACT!

The most surprising thing about revisiting FALCO today is my enjoyment of the music. Is is just pure nostalgia or is it kinda good? Nate assures me it isn't good. But doing a search for any kind of critical reception, I only found one review of the LP FALCO 3 and it was positive giving it 4 1/2 on allmusic.com.

Regardless of whether or not FALCO is regarded as good music, it is obvious that my taste in music was formed in 6th grade and hasn't strayed too far from what I liked then. I LOVE 1980s new wave / synth pop! I stopped listening to this genre by high school, but now I find that I'm primarily collecting UK & European synth pop. And I've picked up more FALCO, too. 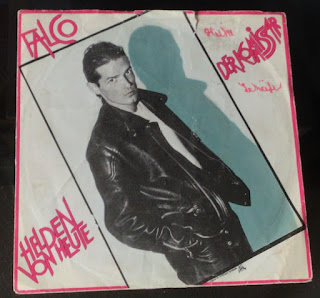