It the time of year to delve deep into the horror genre. This year, I'm using Scarecrow Video's 2021 Psychotronic Challenge as a guide. I'm finding that in order to meet the challenge, I'm re-watching instread of doing a lot of first time viewings this year, but it is good to dust off the videos and DVDs hiding in the back of the media cabinet as I remember the movies that meet the criteria. Also, I'm ignoring that these are supposed to be low-budget and just sticking to anything that would fall into the horror genre.

"RE-ANIMATED: Businesses are opening back up and things are getting back to “normal” so to kick things off you get to watch a movie where something gets brought back to life. We’re baaaaaack!" 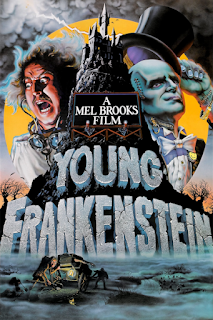 Kicked off the month with Demon Seed (1977) after seeing a trailer for the film and being curious about a movie where Julie Christy is impregnated by a demon. Well, it wasn't that. She was instead taken captive and experimented on by her scientist husband's smart house. Seriously messed up movie complete with creepy robot rape scene.
As there was no actual re-animation in the movie, I followed it up with a classic, Young Frankenstein (1974). It was a delight as always, although my DVD is showing it's age as it isn't anamorphic. We talked about watching Re-Animator instead, but Scout is only a year old and I thought it was too soon to traumatize her with the sight of a re-animated cat.
Day 2 -
MASKS ARE STILL REQUIRED: You know it, at least one character has to wear a mask for the entire movie 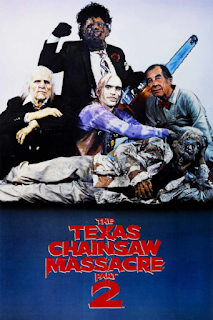 Started early on Saturday with The Texas Chainsaw Massacre, part 2 (1986). Found this on VHS at Goodwill and hadn't gotten around to watching it. I found this much funnier and more enjoyable than I remembered.
And then made it a mask double-feature with Eyes Without a Face (1960). Last October, I watching nothing but horror from the 1960s since it might be my favorite decade for scary movies. So I used the theme as an excuse to pull out my Criterion DVD. Just a gorgeous film. 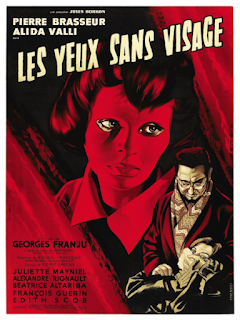 Day 3 -
HIGH SPIRITS: Tickle your funny bones with a side splitter, a gut buster, a real scream. Go on, laugh your head off! 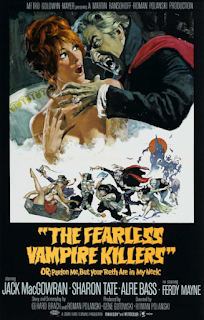 More horror comedies. Seems I'm going to watch all of the lighter stuff at the early part of the challenge. Another Goodwill find was an unopened VHS of the Fearless Vampire Killers (1967). Let's just say that I remembered this being funnier. Did they actually get around to killing a single vampire? I don't think they did. I also forgot to laugh.
So Nate served up Buffy the Vampire Slayer (1992) followed up with The Final Girls (2015).  It was likely 1992 the last time I saw Buffy. I'd forgotten that Rutger Hauer had a mustache. Odd choice for an ancient vampire. And while I was generally entertained by The Final Girls, we spent way too much time trying to figure out how mom could have been in an 80s teen slasher, when mom only looked to be maybe 35 years old. Very confusing.